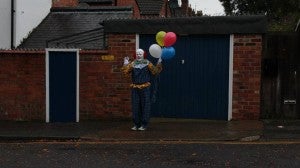 If you've been on social media this week, you've probably heard about the Northampton Clown, a man inexplicably dressed in a clown suit, holding helium balloons and standing around in the United Kingdom. Because the clown is in Northampton, home of eccentric and notable comic book writer Alan Moore, it didn't take long for people to start speculating that Moore may have finally shaved his trademark beard to take on the role of the clown--or at least be involved in whatever it is that the clown is doing. "Apparently there had been a certain amount of comment on the internet suggesting probably some connection. No it's not me," Moore told the Northampton Herald & Post. He added that in the wake of Anonymous and then Occupy Wall Street adopting the Guy Fawkes Mask from V for Vendetta, he's beginning to get used to questions like this--and that there may even be something to the idea that his work is particularly likelyi to "spill into reality," given that his current series of films does indeed deal with clowns--and with the concept of fiction colliding with reality. "I am getting kind of used to this. After having a comic strip I wrote 30 years ago spewing masked anarchists across the global political stage for the past couple of years," Moore said. "Things that I write do have a tendency to spill into reality. Since that was one of the principles behind Jimmy's End [an episode in The Show] - to blur the boundaries between one and the other - I suppose that getting clowns manifesting in my neighbourhood is only to be expected."

Alan Moore Assures You He Isn't the Northampton Clown