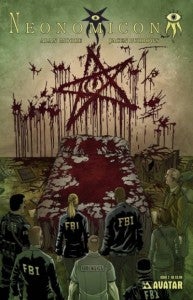 The ten-issue series will be published by Avatar Press, and while no formal announcement has yet been made as to who might draw the book, the Avatar-owned Bleeding Cool implies that it will be Jacen Burrows, who drew Neonomicon for Moore and "will be visiting [Moore] in October."

Bleeding Cool refers to the series as an exploration of "the inspiration behind the Lovecraftian mythos" and says "it will be set in 1919 and star the author H.P. Lovecraft. Exploring scenarios that caused the man to be the writer we are more familiar with, as well as featuring a red-headed policeman, both a closed homosexual and a closet Jewish man."

From context, it seems likely that both the homosexual and the Jewish man will be "closeted," as in concealing their identities. Both phrases can sometimes have that meaning, and it's only the use of two different terms that makes it somewhat confusing.

No release date is yet set for the project, although it's likely that it will be solicited soon, now that Moore is on board and it's been announced.