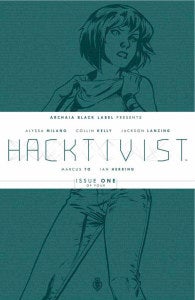 Archaia Entertainment, a division of BOOM! Studios, announced today that they will publish Hacktivist, a new comic book miniseries from actress Alyssa Milano. The series was written by Milano with Jason Lanzing and Collin Kelly, and will feature art by Marcus To and Ian Herring.

Set in the world of tech entrepreneurs and social media, Hacktivist is the story of two friends who operate one of the largest social media firms by day, but by night, use their hacking skills to help important social causes all over the world. That is, until the U.S. government finds out.

“Hacktivist brings Archaia back to its roots as our first 2014 series in the imprint to debut in single-issue form,” said BOOM! Studios Editor-in-Chief Matt Gagnon. “Imagine if the head of Twitter was also Anonymous. That's the intriguing concept that Alyssa Milano brought to us. We're very excited to bring readers this thriller and deliver Archaia's excellence in production design to the single-issue format. Writers Jackson Lanzing and Collin Kelly have crafted a dynamic and authentic story. And it’s fantastic to be working with Marcus To and Ian Herring again. Their work on CYBORG 009 was absolutely incredible.”

“Hacktivist combines my love of tech, social media, and philanthropy,” said actress and producer Alyssa Milano (“Charmed,” “Mistresses”). “This idea sprang from my friendship with Jack Dorsey, the creator of Twitter, and my fascination with how one person can single-handedly bring about positive change in the world. It’s a concept I felt Archaia was the right publisher to help me develop. They understood the potential and assembled a great team in Jackson, Collin, Marcus, Ian, and [letterer] Deron [Bennett] to create a story that had no limits. I can’t wait for people to read it!”

Everything Coming to Hulu in June 2021