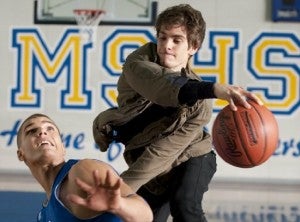 In a newly-released clip from Marc Webb's The Amazing Spider-Man, out July 3 from Sony, Peter Parker takes it to the hole against an extremely agitated Flash Thompson. And just in time for the NBA Finals, no less.

Titled "Slam Dunk," the ad runs just over a minute and a half long and sees Peter toying with an angry young man in a basketball uniform, keeping the ball from him using first his speed and then his grip, before finally diving over the boy and demolishing the backboard with an airborne slam dunk.

It feels a little more comedic than other clips we've seen from The Amazing Spider-Man so far, not only just in terms of the frivolous use of powers but in terms of the embarrassing and public way that he manhandles the bully being so reminiscent of the Flash Thompson "fight" in Sam Raimi's Spider-Man.

Report: Another Released WWE Star Is Heading to AEW