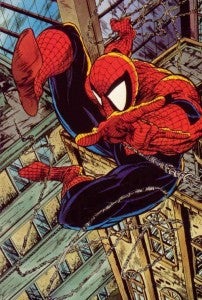 During a Target-sponsored Twitter discussion last week in support of the video release of The Amazing Spider-Man, filmmaker Marc Webb confirmed that The Descendants star Shailene Woodley will play Mary Jane Watson in the sequel, according to Comic Book Movie.

"YES! She's the jam - love her, look forward to working with her in ASM2," tweeted the director when asked about Woodley's then-rumored casting. No official word on Jamie Foxx.

He also addressed questions about some changes that will be made to the costume between movies, saying that Spider-Man's eyes will be made larger and that there will be new webshooters, which the filmmaker described as "gnarly."

Sounds as though the Amazing Spider-Man 2 costume will be influenced by Todd McFarlane, no?