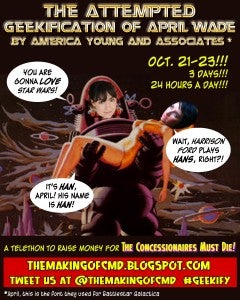 America Young is a writer, director, actress, stuntwoman, web personality and co-host of Mask & Cape on the Stan Lee's World of Heroes YouTube channel, among what seems like too many credits to mention in this small space. She's also a truly compelling personality who knows how to command a room, so it's not surprising that she's working on a feature film ambitious enough to require some crowdfunding through IndieGoGo.

What's either more, or less, surprising depending on your perspective is that the way she chooses to do so is by hosting a live webcame "live-a-thon" where fans can watch her attempt to "geekify" the film's writer and producer, April Wade, who Young tells fans on the movie's website has never even seen Star Wars before.

The film, The Concessionaires Must Die, is a bit of a movie theater Empire Records, so there's something poetic about asking for grassroots funding to get it made. But just that wasn't quite enough for Young and Wade--they wanted to give the fans something tangible up front that they could enjoy for their contribution. Enter The Attempted Geekification of April Wade by America Young and Associates.

The pair will undergo a three-day webcast during which time Wade will be subjected to Star Wars, Battlestar Galactica and much more--all in an attempt to make her understand references made in the kinds of movies she already works on.

What is The Concessionaires Must Die, and what's your pitch in a nutshell for what you're up to?

Logline: On the brink of their beloved single screen independent movie theater being shut down forever, a misfit band of nerdy theater workers face the evils of corporate theaters, foreclosure and even scarier, having to decide what they want to be when and if they ever grow up. Concessionaires Assemble!

This has the characters and more info on the movie.

So what made you decide that this little, umm, social conditioning experiment was necessary?

We wanted to raise money for the movie but having been bombarded with crowd sourcing campiagns we wanted to go about it in a different way. April Wade (my producer) came up with the idea of the Live-A-Thon to earn our money! While we were discussing it it somehow came up that April had never seen Star Wars hence the idea for the Geekification began!

It's a very scattershot approach you're taking, immersing her in a little bit of everything for the three days. Are you hoping that all of it will stick, or just trying to help her find the stuff she can connect with?

I'm trying to give her a healthy cross section of shows that I think she would either genuinely like or would need to know because of references in the script of our movie.

What criteria did you use when you were putting together your "playlist"?

Suggestions. My personal favs and specific things referenced in the script.

I'm guessing by the way that the long-form version of the title is a reference to Brad Pitt's Jesse James film?

(Fun fact: I'm related to James...distantly...and also to Benjamin Franklin, which leads me to believe my destiny is to be Lex Luthor.)

Does it make someone less of a geek if they like Spaceballs more than any of the Star Wars films?

Not necessarily! This is a no judgement zone.

You're a geek--but you're also talented and gorgeous and have showbiz ambitions. Do you think it's helpful to have all of them going for you instead of just one or two?

Awwwww best start to a question ever! Yes. I do think that in the industry nowadays you need to be able to do a few things! Sometimes I worry that if I don't concentrate on one that I might become "Jack of all trade master of none." But being able to a number of things has always, always paid off for me!

What would you say, though, to people who would note that if someone were doing a similar project to "de-geekify" somebody, it would be viewed with, ahem, some skepticism in our circles?

Ummm interesting question! We are sharing fun and things that we love so as long the as de-geekify isn't about hate or judgement. I'm open to it!

I forgot until I read your bio on the Concessionaires site that you're a stuntwoman as well. So I should be nice in this write-up, because you can probably beat me up?

You were totally a gentleman so you have nothing to worry about! Just watch your step ;)

America Young on Her "Geekify" Telethon (And Why It's Happening)