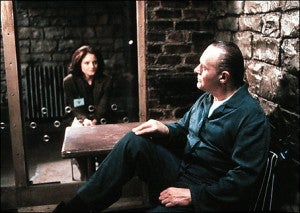 In addition to Bryan Fuller's Hannibal, following the adventures of Hannibal Lecter, TV Guide is reporting that there is now a series in development that will tell early stories of Clarice Starling, the FBI agent who faced off with Lecter in The Silence of the Lambs. The Hannibal TV show, already set for a 13-episode run on NBC in the fall, will trace the relationship between Lecter and Will Graham, the agent who apprehended him in Red Dragon. Hugh Dancy of Martha Macy May Marlene will star as Graham with Hannibal himself not yet cast. This new announcement sees Clarice move to Lifetime, where it will join Jennifer Love-Hewitt's The Client List in what the network hopes to be the first couple in a run of new original series. The show was hinted at during upfronts, but there was no official announcement to be made until yesterday afternoon, when TV Guide announced that the series was moving forward under MGM's production banner. No casting yet or premiere date is yet known.

Another Silence of the Lambs TV Show Planned