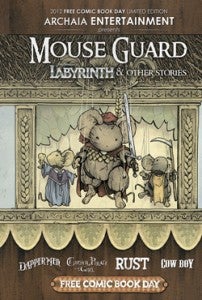 Over at the Free Comic Book Day website, the 2012 Gold Comic Books were announced today. Along with titles from DC, Marvel, Boom! Studios and other big-time publishers, a particularly interesting entry in the list came from Archaia Entertainment, whose free comic book this year will not only feature 48 pages of original shorts by the creators of its award-winning titles like Mouse Guard and Jim Henson's Labyrinth, but which will come packaged as a nice-looking hardcover volume. Carrying the official title Mouse Guard, Labyrinth & Other Stories, Archaia's free hardcover will present short, original stories ("not reprints or excerpts from upcoming releases," they clarify) based on some of their most popular properties: Mouse Guard, Jim Henson's Labyrinth, Cursed Pirate Girl, Rust and Dapper Men. Featuring a cover by David Petersen of Mouse Guard fame, the book will be written by Jeremy Bastian, Nate Cosby, Royden Lepp, Jim McCann, Ted Naifeh and David Petersen, with art by Bastian, Petersen, Chris Eliopoulos, Cory Godbey, Janet Lee and Royden Lepp. "We've offered single issues for past Free Comic Book Days but Archaia's specialty is producing beautiful, hardbound collections," said Archaia President and CEO PJ Bickett in a statement earlier today. "Offering a hardcover book for Free Comic Book Day is our way of helping to drive more potential customers to comic book stores on what has historically been their busiest sales day of the year. But it's also a way to educate readers on what Archaia is all about: high-quality graphic novel collections of stories they can't get anywhere else." Certainly it not only seems poised to stick out on Free Comic Book Day (May 5, 2012--always the first Saturday in May), but to up the ante considerably for future events, including possibly the second Free Comic Book Day in 2012, recently announced by Diamond Comics Distributors and set to take place around Halloween. With Marvel reprinting Avengers #12.1 and DC apparently using the forum as a place to tease their entire line of New 52 books rather than focusing on a single story, it's a good year for publishers like Image (who have a thus-far-mysterious 20th anniversary book announced), Oni Press (with a star-studded Yo Gabba Gabba adaptation and Archaia to be the talk of Free Comic Book Day. With a small hardcover of entirely original material, Archaia certainly seems to have set the bar pretty high to be the company everyone's talking about at the store the following Wednesday.