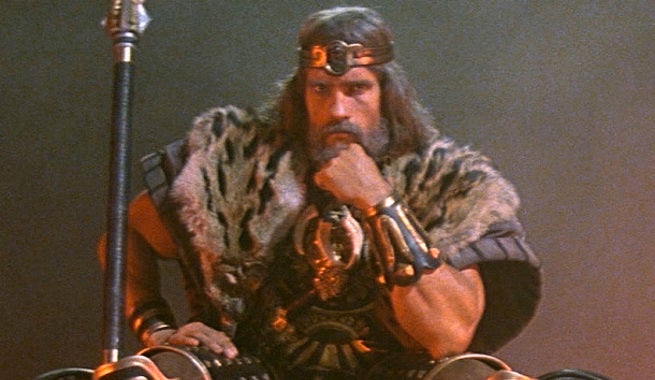 Once Arnold Schwarzenegger is done trying to breath new live into the Terminator franchise with Terminator Genisys, he'll move onto his next franchise as he prepare to return to the Hyborian age in The Legend of Conan.

Producer/co-writer Chris Morgan says the new film is not a reboot, but instead will be a direct sequel to John Milius’s classic swords & sandals fantasy film Conan: The Barbarian, according to an interview with The Arnold Fans:

Our tone is a logical extension of the character established in the ’82 film…but 30 years later. When we meet him again, Conan has been many things over the course of his life — a thief, a warrior, a pirate, a king, a legend — and is now an older man. Think Unforgiven…with a sword-wielding barbarian.

Milius was a visionary. And a hero of mine. He established a milieu that is stunning and violent and clear — incomparable. The goal, the dream, is to live up to his world. To make it worthy. And to expand on it in a truthful way that audiences will embrace. We’re very lucky that the architects of this new film — the writer, the producers, the studio and most of all, Arnold — who is Conan — are all first-generation fans who either worked on the film or who came along for the ride, cheering from their theater seats opening night. We plan nothing more than to immerse ourselves in the world Milius envisioned from Robert E. Howard’s unforgettable stories and Frank Frazetta’s stunning artwork. I can’t give specifics (nobody likes a spoiler!), but know we are honoring the locales, the religions and the traditions of the ’82 film.

Our marching orders from the studio were to create a film worthy as a successor to the 1982 film, which was pretty brutal. To Conan it’s not about fancy sword moves; it’s about the fastest and most effective way of disposing of your enemy. A dance of death, maybe, at least primal. In my opinion, Conan is beloved because of his political incorrectness. He doesn’t think, he just acts. People can relate to the freshness of somebody who doesn’t give a damn about civilization — in fact, despises it. At the same time he is a magnificent fighter, leader and friend.

Morgan also teased that at least three actors from Conan: The Barbarian will be returning to reprise their roles in Legend of Conan, though he wouldn't say who, and that he's hopeful production can begin as soon as this fall, once Schwarzenegger is done promoting Terminator Genisys.

Arnold Schwarzenegger's The Legend Of Conan Will Be Brutal Sequel, Bringing Back Some Original Cast