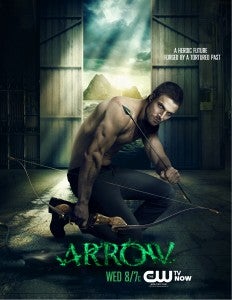 The CW announced today that in Arrow's upcoming tenth episode, set to air in December, will introduce viewers to the Batman villain Firefly. Check out Zap2It's episode summary below:

"Arrow": In episode 110, Oliver will meet Garfield -- a firefighter who was horribly burned three years ago, and never recovered from the trauma. Since then, he's been abandoned by his wife and kids, and he's now described as a "bitter, vengeful shell of a man." Meanwhile, the Starling City Fire Chief is also haunted by Garfield's injury... since he's the one who was forced to leave Garfield behind to burn.

In the comics, of course, Firefly is essentially what you would expect from a character with such a name: he's got a flying suit and he's often an arsonist. Garfield Lynn is an out-of-work visual effects artist who uses the skills gained at his "day job" to become a costumed criminal with a Mysterio-like flair for the dramatic and for deception.