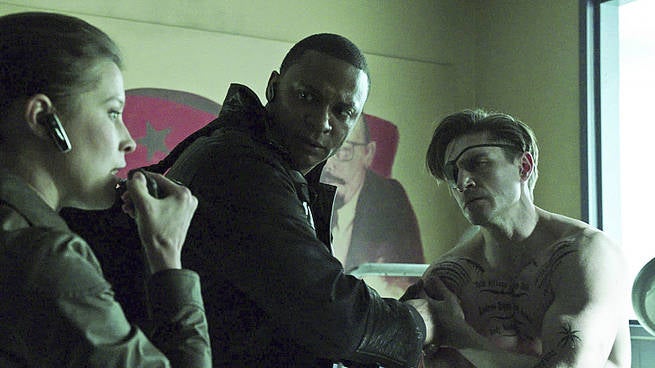 Tonight's episode of Arrow had to be a lot of things to a lot of people -- so much so that one of the biggest elements -- the Diggle/Michaels wedding -- was over almost before it started.

There were so many things happening that we probably had a fair number of Easter eggs and references in there.

This is the first time we've seen that friendly microphone (and news report) in a while. It's a fixture of Arrow and also something that we see in the comics from time to time. 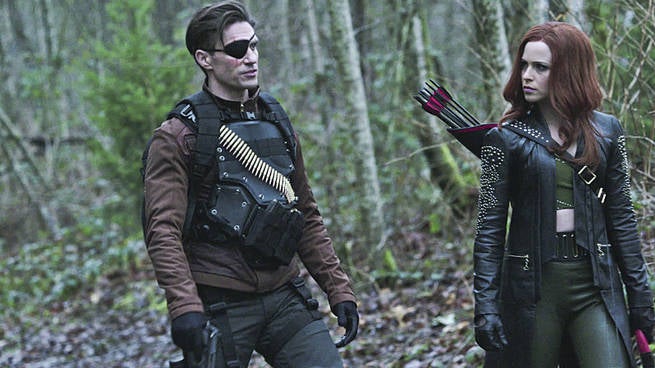 It's hard to ignore the fact that last year's biggest blockbuster dealt with many of the same issues that Floyd is dealing with this week.

There's even a link at the end of the episode to contact the Wounded Warrior Project or to go to cwtv.com/arrow for details on tonight's episode -- although as of this writing (immediately after it aired on the East Coast), there's nothing pertinent at that link yet.

Those who have been following Suicide Squad and Deadshot for years know that his fractured family life, and especially his relationship with his daughter, is an important part of what makes him tick. Seeing a little of that before he's -- at least temporarily and apparently -- written out of the series was definitely important for fans. 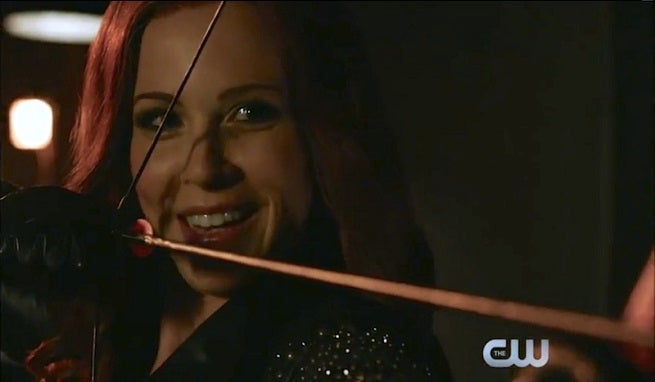 So if you thought there was a bit of similarity between the Deadshot/Cupid dynamic here and the Deadshot/Harley Quinn dynamic in the recent Suicide Squad comics, you aren't the only one.

"The reason that the Harley and Floyd thing worked in the comic is because of that dynamic. There's a lot of red tape that goes on with being able to get certain high-end characters on our show. It would have been nice to do it with Harley, but to have somebody to step in to play that role, to create that dynamic to tell those stories is very important because there's such potential there," explained Michael Rowe, who plays Deadshot, in an interview with us last night. "We're drawing from the comics in a lot of ways to do the stuff that we do on Arrow. We want to be inspired by the comics but it's going to be a little boring if you're just ripping it right out of the pages. So it's kind of inspired by something that happens in the comics, then we put our own spin on it, our own twist. The characters are inspired by but they're not directly out of the pages of the comics. There's some wiggle room there and some real interesting scenes to play around with and stuff like that. I think it's great that they get to tell some of these stories because it's just two interesting characters that get to come together in these kind of unlikely, romantic kind of situations, you know?" 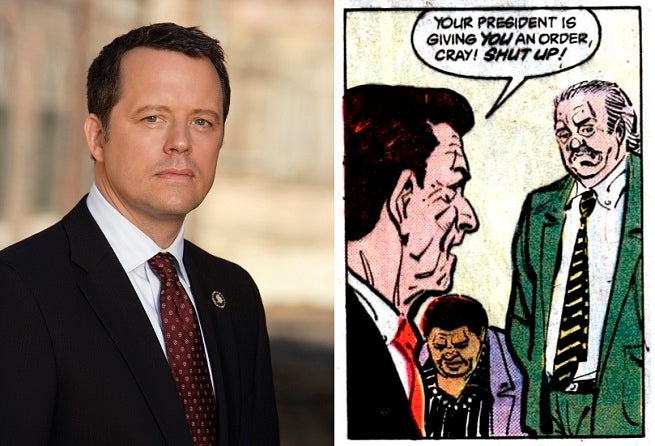 This is a bad, bad dude from the Suicide Squad comics from the '80s.

But, if this makes fans feel any better about how tonight played out, a very short-lived bad dude.

In the comics, Cray is a U.S. Senator who comes into conflict with Amanda Waller and the Squad and who is eventually assassinated by Deadshot. He first appeared in Suicide Squad #11 and was created by John Ostrander and Luke McConnell.

He had a son named Adam Cray, who briefly served as The Atom. At first Cray was widely believed to be Ray Palmer in disguise, by both the fans and the characters, as he used a modified version of Palmer's size-changing belt and a mask that covered most of his head. Actually Cray had been recruited by Palmer himself, who faked his death, in order to apprehend the Micro Squad, a group of villains that had been shrunk down.

Wow. Quite a bit of stuff to process today.

The biggest thing is that with Diggle and Lyla talking about cutting ties with their respective action-adventure employers, it seems they're out of the Suicide Squad. And with his apparent death, so is Lawton. So...what's left?

Sounds like the Suicide Squad is dead, at least for now, and fans will likely lay the blame for that at the feet of a big-budget motion picture version.

That said, the H.I.V.E. plot is still out there to be resolved. Who knows whether that will motivate the Diggles to find their own organization to found. There are plenty of DC names they could end up with, from Checkmate and SHADE to the DEO or even The Outsiders.

...and now some words from our readers:

Not sure if this was intentional, but the way Oliver stopped the Atom is pretty similar to how he stopped Barry in the crossover episode. It looked like he was down and out, but then boom. He flicks the mini arrow at 'em and takes him down (For Barry the arrow went through his leg, Atom only got his power cut). Not exactly the same, but it shows Oliver sticks to strategies that work.