SPOILERS for tonight's episode of Arrow ahead.

Sometimes you have stuff you just can't tell people about yet.

Last week, Arrow Executive Producer Marc Guggenheim joined a roomful of reporters to talk about the premiere, which had screened for them just moments before. The room was fairly surprised by the brutality of Sara's death -- even those who saw the loss of Canary I coming with all the talk of Laurel taking up the mantle this year.

So, while we couldn't include it with the rest of our look ahead at the season that's coming up, there was some talk about tonight's big twist... 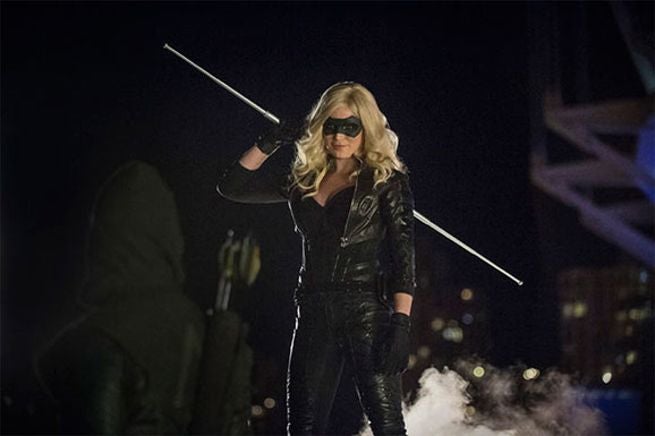 At what point did you know that you were going to kill Sara in the premiere?

Every season, we spend what really should be our hiatus, and what really should be me relaxing on a beach, planning out the whole season. It's what we did in Season One, and it's what we did in Season Two, so we did the same process in Season Three. We just started off talking about what the season is about. I've spoken at length, at this point, that it's about identity, and we talked about what Oliver's journey for the year is going to be, and we talked about what all of the other character's journeys would be and just in the course of those story conversations, we had this notion of sort of starting the year off in a way that we typically end
the year.

So it was just part and parcel of our plan for the year, ever since we started -- one of the first ideas we kicked around.

It was hard. Every time we kill off a character on the show, it's always incredibly hard. We're not Game of Thrones, we're not Sons of Anarchy, it's really, really, really difficult. We're very lucky, and I really mean this: our cast and our guest cast are always wonderful people. We've been very lucky. We have this great group and a wonderfully welcoming cast and Caity Lotz completely fit into that family. So it's always hard to kill off someone who you just really enjoy working with and you really loved working for and loved seeing on the screen. But as with Tommy's death and as with Moira's death, the story implications for this development are so far-reaching for the show and affect all of the characters.

We always call it the terribly story math. It really kicks off -- I mean, it kicks off a mystery that will really drive us for at least the first half of the year. It will set Laurel on a trajectory that she's never had before on the show. It will create all these other complications and dynamics that I can't talk about because it would spoil stuff. And it buys us a long story and it speaks to all the things that we wanted to do this year in terms of Laurel's character, in terms of Oliver's character, in terms of Felicity's character. It's always a hard thing to do but it is really the engine that's driving the whole thirteen.

We heard when Caity Lotz came back that it was for a minimum of three episodes...

I wasn't lying! I wasn't lying! I wasn't lying! Totally true. You're going to see her in next episode and you're going to see her in at least one other episode. The truth is, we have stories that involve Caity Lotz and one of the beautiful parts of the show is, we do flashbacks and we still want to tell the story of what happened after Sara washed up on the shores of Lian Yu after the events of 223, the sinking of the Amazo. And how she met Nyssa, and how she joined the League of Assassins. There's still a lot of story left to be told with Sara. But we did make a contract with Caity for three episodes, so I wasn't lying and you certainly haven't seen the last of her.