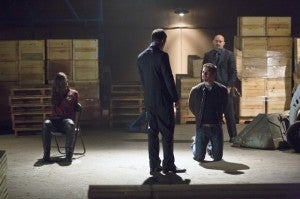 The CW Network's hit DC Comics adaptation Arrow will add an episode to its first-season order, bringing the total number of episodes airing this season to 23, reports Green Arrow TV. The series, which was originally approved for a 13-episode order, got an order for its back nine, rounding out the season at 22 episodes, just over a month ago. A twenty-third episode brings Arrow even with Supernatural, the cult hit with which it shares CW's Wednesday nights. Supernatural, being a long-running series, already had the full 23 episode order in place. Tomorrow's episode of the series, which was co-written by DC Entertainment Chief Creative Officer Geoff Johns, guest stars Jessica de Gouw as The Huntress.

Arrow Gets An Additional Episode