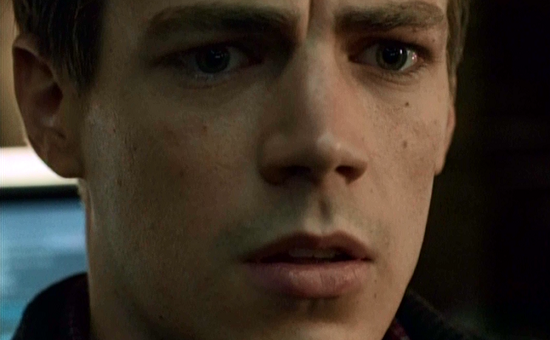 Warning: Spoilers ahead for tonight's episode of The CW's Arrow, titled "The Scientist."

Earlier this week, members of the press attended a Q&A session where they were treated to a screening of Arrow's midseason finale, titled "The Scientist," with commentary from series producers and guest star Grant Gustin, who appears as Barry Allen ahead of his appearance in a pilot episode for The Flash in 2014.

As we've just seen from tonight's episode, though, next week will start with a very different status quo, as Barry found himself--in tonight's final scene--face to face with Oliver, unmasked as the vigilante, and inside the Quiver ("Arrowcave").

There was actually a question about just that this week, and we withheld it from previous publication of the interview so as not to spoil the episode. But here's what Gustin and executive producer Andrew Kreisberg had to say:

At the end of episode 8, Barry does find himself in Arrow's secret lair so what can you tease about what we'll see in episode 9 and how he'll react to that?

Gustin: I think part of the fun of the episode is that Barry's the ultimate fanboy. In a way, Barry is us. He represents the audience and part of the fun of this is, what if you were in the Batcave, and how cool would that be? And part of the episode is Barry getting to revel in that and part of it is him getting to see, oh, sometimes it's better meeting your heroes becuase they're complicated and cranky and maybe jealous of the way you're looking at their assistant.

Kreisberg: Watching Barry sort of be both a fish out of water in our world but also how quickly he blends into the team and how at the end of the day Oliver just wants the job done and Barry helps get the job done--that's sort of the saving grace for him.