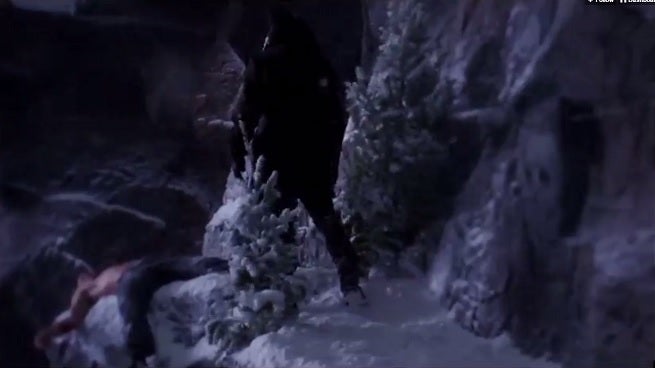 Warning: Spoilers ahead for the midseason finale of Arrow.

Could John Barrowman's Malcolm Merlyn be heading for a much larger, and perhaps less villainous, role in the second half of Season Three?

There are some indicators...including what might be an implication that he is the one who saves Oliver Queen.

Even though he certainly isn't telling anyone if that's the case.

In a newly-leaked trailer from New Zealand in support of a Warner Bros.-heavy network Channel 2, we see that Merlyn is the one delivering not only the news that Oliver Queen is dead to Team Arrow...but the sword that killed him as well, presumably as evidence.

That indicates, of course, that Merlyn found his way onto the mountaintop where Ra's al Ghul had left the sword in the rocks above where Oliver fell.

Green Arrow TV, owned and operated by the same folks who brought that trailer to our attention, is also re-running an old interview with Barrowman where he appears to confirm that, yes, he was there.

"All I'll say to give you a little hint, it's going to be very cold what we're doing tonight -- and wet," Barrowman said, confirming "I'm on a mountain, too," when confronted with the fact that Amell had already confirmed the mountaintop scene.

(You can see the full interview below.)

That he was there, of course, isn't in and of itself proof that he'll be instrumental to Oliver's return, but many fans have speculated ever since the "Survive" teaser was released following the midseason finale that the person standing over Oliver's body had to be either Merlyn or Maseo...and that in either case, it seemed likely they would be key to Oliver's return, perhaps with the (very wet) Lazarus Pit, which has long been suspected as instrumental to Merlyn's return following his apparent death in the Season One finale.

But...could we see him headed in a more heroic direction? Certainly he would stand to benefit by bringing Oliver back into the fray, if only to square off against Ra's al Ghul again. And he could stand some camera time with Team Arrow, of course.

Merlyn, of course, has had a complex relationship with Thea up to this point. It seems fairly likely that will play into whatever relationship he has with Oliver going forward. Of course, given what Oliver now knows about the true nature of the Merlyn/Thea relationship, it's hard to sayjust howthat will manifest...!

Arrow: Is Merlyn The Hero of the Second Half of Season Three?