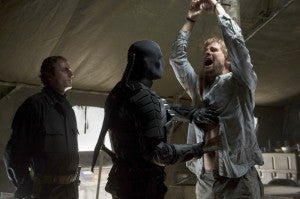 A new series of photos released by The CW earlier today tease the developments coming up in the fifth episode of Arrow, titled "Damaged" and airing on November 7. The photos seem to show a fair amount of flashbacks to Ollie's time on the island, where he's taking on a group of mercenaries, being trained in archery by a man called Yao Fei. In descriptions of the episode online, Ollie is being charged with murder and won't accept representation from anyone other than Laurel Lance. Who he might be charged with killing is unclear, although it looks like there was plenty of bloodshed on the island before Ollie was left for dead. Deathstroke and Eddie Fyers (also spelled Fyres in the comics, and spelled Fryers in PR material for the show--we tried to get hold of some folks at Warner, who told us it was Fyres in the show as well) apparently paid Oliver a visit, which previews have said resulted in Deathstroke giving Ollie his first scar (seen at right, we're guessing). All of this is aside from the first appearance of John Barrowman as the well-dressed man, a wealthy family friend of the Queens who reappears and whose presence is said to have a ripple effect through the rest of the season. Showrunners and even Barrowman have been cryptic with information, tantalizing fans with possibilities and even allowing fans and critics to go along believing that he might be playing Bruce Wayne. Whether that's his picture you see Fyers holding onto in the photos below remains to be seen, but if it is, it's probably a safe bet that he is either the presumptive murder victim (which would explain him talking to Moira Queen in an empty courtroom) or (another popular theory) Slade Wilson, the man behind the Deathstroke mask, which might also explain it since it's strongly implied that Moira is the one who sent Deathstroke after her son. The fact that Deathstroke appears to have both of his eyes in all of the pictures here seems to suggest that's a realistic possibility. [gallery link="file" order="DESC" columns="4" orderby="title"]