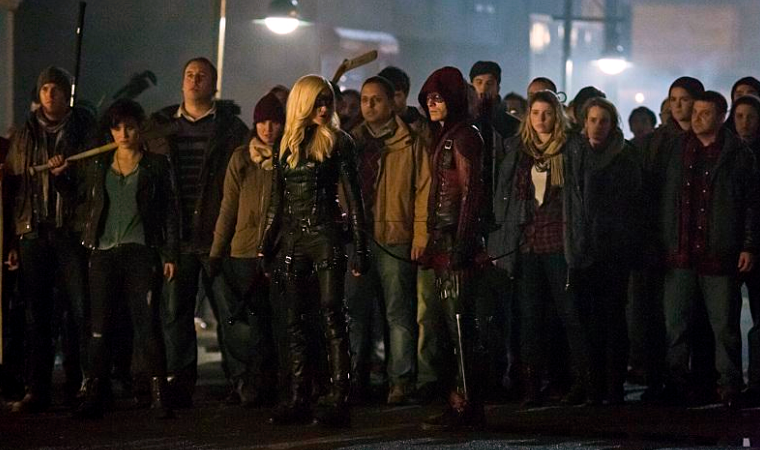 "Uprising" opens with Oliver trying to leave Tatsu's camp in the mountains, but she stops hm before he can leave. The two talk for a minute before he departs for Starling City.

Back at home, Brick's gang of foot soldiers wreck havoc on a local diner. Arsenal and Canary come in however, and stop the looting. When they leave, Sarah's old friend, Sin, sees the Canary and mistakes Laurel for Sarah. Back at the Arrow Cave, Felicity speaks with Captain Lance about the escalating crime.

Meanwhile, Malcolm Merlyn trains Thea in sword fighting. He teaches her that hesitation results in death, explaining that mercy is not part of the League of Assassin's code. If Thea wants to survive the League's eventual assault on Starling City, she must be prepared to kill. He then tells the story of the his first time that he killed, and that the victim was his wife's murderer.

The story cuts to a flashback several years ago. A much younger, and richer, and weaker Malcolm comes home to a young Tommy. They play for a minute, but the doorbell rings. When Malcolm goes to the door, he is greeted by two officers who inform him that his wife is dead.

Back in the present, Arsenal meets with Captain Lance. They discuss how they can defeat Brick. Lance hands over all the evidence and files Starling City PD has on Brick, but then asks about Arrow and Sarah's disappearance. Lance wants to know where they are, but Arsenal says he'll update him when he can. Arsenal goes back to the Arrow Cave, where they look up possible places to find Brick. As they unpack Lance's evidence and old case files, they discover that Brick was the one who killed Malcolm Merlyn's wife. Malcolm, who has the Arrow Cave bugged, hears this information. Apparently, he must have killed the wrong man in his supposed act of "vengeance."

Out in the woods, Oliver walks toward Starling City. Tatsu follows him, and says that if he ever wants to defeat Ra's Al Ghul, he'll have to keep training.

In Starling, Malcolm prepares to go after Brick and finally avenge his wife's death. In a cut to the past, we see a mourning Malcolm at his wife's grave. A man comes to him and gives him a lead (obviously an incorrect one) on his wife's supposed killer.

The story cuts back to the Arrow Cave, where Team Arrow finds Brick's hideout. They stage an assault. Felicity cuts the power to Brick's hideout first, then Arsenal and Canary systematically take out Brick's men in the shadows, Batman-style. Brick confronts Canary and Arsenal, but before they're about to engage, Malcolm enters the fray and shoots Brick down with an arrow of his own. He doesn't kill him though, and Brick gets away.

Malcolm, Arsenal, and Canary retreat to the Arrow Cave, where Malcolm proposes that they team up. The team thinks it's ludicrous, but Malcolm says that they're common hatred for Brick should outweigh their own disdain for one another. After the meeting, Roy heads upstairs to Verdant and talks to Thea. She explains why she's been training with Malcolm, telling Roy for the first time that it was Malcolm who saved her during Deathstroke's attack.

Roy takes this information and goes back downstairs to the Arrow Cave. He tells Team Arrow that Malcolm truly cares about Starling City, and that basically, the earthquake machine was just a hiccup for an otherwise spotless record. The team continues to debate, but ultimately decides to not throw in with Malcolm. Diggle meets with Malcolm to tell him the news.

In the past, Malcolm tries finding his wife's killer, a local street punk. Malcolm confronts the man, and pulls a gun on him. But this younger Malcolm is completely untrained, and gets thrashed by the killer. But the killer leaves the gun behind. Malcolm takes it and kills him. Panicking, Malcolm splits from Starling City and heads to Nanda Parbat. He explains that his rage has not subsided, and only the League of Assassins can make him truly helpful to Starling City.

In the present, Tatsu leads Oliver to a truck that will take him to Starling. Before they split, Tatsu tells Oliver that he will have to sacrifice what he holds dear if he is to ever defeat Ra's. Back in the city, Thea approaches Malcolm. She tells Malcolm that she told Roy about the night of Deathstroke's raid.

Back in the Arrow Cave, the team discusses what they should do to take down Brick. While they don't want Malcolm's help, they know that they need aide somewhere. It's officially recruiting time, as the team brings in Ted "Wildcat" Grant, Sin, and a mob of Glades residents in their assault on Brick. With their army in place, Arsenal and Canary confronts Brick in the Glades. Brick's team of soldiers assembles, as does Team Arrow's. The battlefield is formed, the war for the Glades begins.

It's go-time on the streets. As the citizens and thugs duke it out, Wildcat engages Brick. Brick is about to kill Wildcat, but Arsenal jumps in and saves him. Brick tries fleeing the scene, but he's cut off by Malcolm. Malcolm cuts him down, and pulls a gun on him.

Back in the melee, and Arrow comes out of nowhere and takes down a thug. And since Arsenal didn't fire it, it only means one thing: The Arrow has returned.

Malcolm is about to kill Brick, but Arrow emerges and tells him not to do it. He says that for Thea's sake, Malcolm can't murder Brick. Malcolm decides not to kill him. Arrow then re-enters the crowd and jumps on top of a bus. With all eyes on him, including news cameras, Arrow tells Starling City that Brick is going behind bars. Now that he's back, Arrow says, Starling City is once again under the Arrow's watch.

Captain Lance's team moves in, and proceeds to weed out Brick's thugs. Captain Lance runs into Sin. Sin tells Lance that she's learned something: The Canary is no longer Sarah, and someone else is impersonating her. Malcolm goes back to Thea at her apartment, but is quickly followed by Oliver. While Thea goes to make tea, Malcolm tries explaining his recent actions to Oliver. Oliver warns Malcolm that Ra's will come to Starling and eventually learn that Thea killed Sarah. ANd when he does Olvier will have to protect Thea. Oliver then asks Malcolm to train him in combat, so that he can best Ra's in their eventual rematch.

Arrow then goes back to the Arrow Cave, where he has an emotional reunion with the team. He congratulates them all for keeping the city together in his absence, but then drops the bomb that he will train under Malcollm.

This infuriates Felicity. Arrow tries explaining his actions to Felicity, but she says that she expected a different—or, better—Oliver Queen to come back from the dead. She tells Oliver that she doesn't want to be a woman that he loves, seemingly extinguishing and hopes at a future romance. What a heartbreaking cliffhanger.