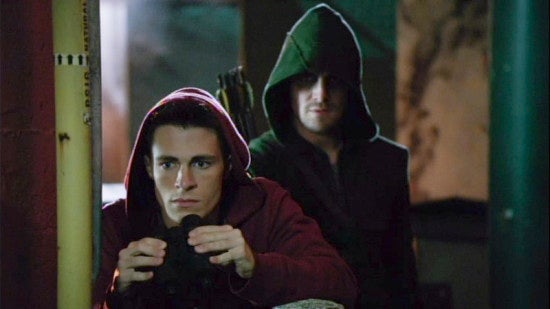 The day after Marvel’s Agents of S.H.I.E.L.D. hit another season low in the ratings, The CW’s Arrow, based on the DC Comics character Green Arrow, earned its biggest numbers of the year in an episode that revolved around Amanda Waller and A.R.G.U.S.

Yeah, that's almost word-for-word what last week's article on the Arrow ratings said. That's the kind of season it's been.

These are all overnight ratings estimates and are subject to change, but if they do, the trend this season has been to adjust up slightly, meaning that the likely scenario is that it will set a new record for its best performance in the 18-34 demographic.

An unusual turn of events came with The Tomorrow People, which has so far this season seen its fate generally tied to Arrow. Two weeks ago when Arrow hit a season low (it was competing with the World Series), The Tomorrow People did as well and then rebounded for a new high on the same night Arrow made its previous season high last week. With Arrow up double digits in almost every metric, though, The Tomorrow People stayed pretty much stable, suggesting perhaps that it has found its ceiling--or that Arrow has become appointment viewing, perhaps, for people who switch channels right after.

Last night, The CW announced that Barry Allen--played by Glee's Grant Gustin--will appear for the first time on December 4 with an eye toward his final appearance this season, when he'll leave to star in his own CW pilot as The Flash.