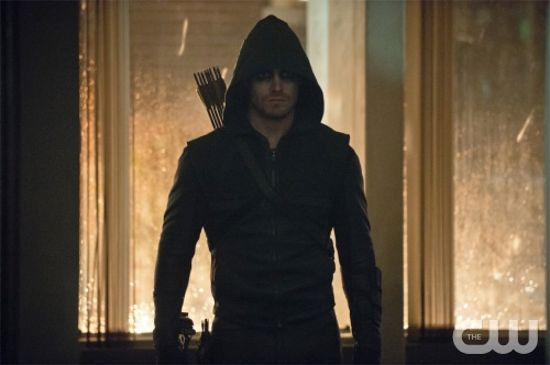 The CW has released several clips for the "Broken Dolls" episode of Arrow, and we've collected them all together for you in one article. Just based on the clips, "Broken Dolls" looks like it is going to be one of the most scary, action-packed, riveting episodes of Arrow yet. In the three clips below, viewers are treated to a chilling threat from a criminal named Barton Mathis, some montage scenes showing off Black Canary's fighting prowess, and Roy Harper in a thrilling chase with Sin.

In “Broken Dolls,” Lance (Paul Blackthorne) learns a criminal named Barton Mathis (guest star Michael Eklund), whom he put away years ago, broke out of prison during the quake and is back to torturing and murdering women. Felicity (Emily Bett Rickards) offers herself as bait so Arrow (Stephen Amell), Diggle (David Ramsey) and Lance can catch this villain, but the plan goes awry. Furious, Mathis kidnaps Laurel (Katie Cassidy) in retaliation and plans to murder her while Lance watches. Meanwhile, Thea (Willa Holland) and Oliver are stunned when District Attorney Adam Donner (guest star Dylan Bruce) seeks the death penalty for Moira (Susanna Thompson). Oliver asks Roy (Colton Haynes) to help him find the Canary (Caity Lotz).

The “Broken Dolls” episode of Arrow is directed by Glen Winter and written by Marc Guggenheim & Keto Shimizu. “Broken Dolls” is scheduled to air on Wednesday, October 23 at 8 PM ET on The CW.