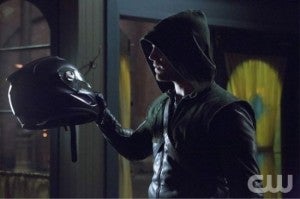 In a new podcast interview at The Huffington Post, showrunners Marc Guggenheim and Greg Berlanti discussed a wide range of topics relating to their CW series, Arrow. While a good piece of the interview focused on the series's politics, there was a fair amount of discussion of Oliver's journey from vengeance-driven vigilante to justice-seeking hero (a move that will please comics fans dismayed by his anger and violence in the first half of the season). Here's the bullet points on the podcast, as laid out by HuffPo, and a link to the podcast itself:

Arrow Showrunners on the Rest of the Season