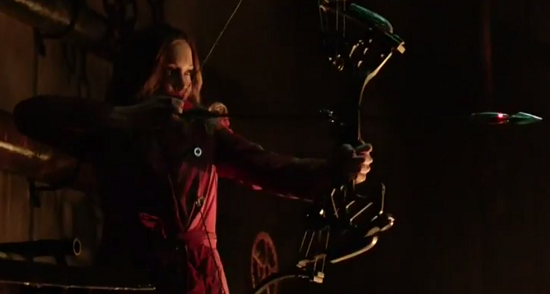 The CW have released an extended, 30-second preview for next week's episode, titled "Streets of Fire." Featuring the return of John Barrowman's Malcolm Merlyn, the episode sees Deathstroke's Mirakuru army blasting through the city, wreaking havoc and, because of the effects of the drug, more or less immune from consequences. The police department and district attorney's office seem at a loss while Team Arrow is fragmented, with Sara still missing. The penultimate episode of the season, next week's episode is named after a track on the Bruce Springsteen album Darkness on the Edge of Town (just like the second-to-last episode of Season One). Besides Merlyn, there aren't any listed guest stars, and it seems as though the second-to-last episode is very much just Slade and Oliver throwing down while the rest of Team Arrow is largely off camera setting up for the finale. Producers have said that from the third act of tonight's "City of Blood" through until the finale, the show takes place more or less in real time (so Oliver's declaration that "it ends tonight" isn't wrong). "Streets of Fire" will air on May 7 at 8 p.m. EST on The CW. You can see the official text below.