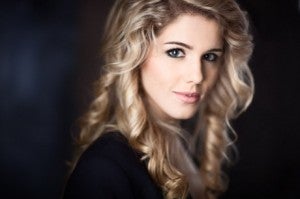 Emily Bett Rickards, an actress best known for her work on a direct-to-DVD Flicka movie featuring country music star Clint Black, has been cast in the role of Felicity Smoak on Arrow, according to a report at Green Arrow TV. In spite of comments by series star Stephen Amell to the effect that superheroes don't exist in the world of The CW Network's forthcoming Green Arrow adaptation Arrow, that hasn't stopped the showrunners from either casting or at least hinting at the existence of non-powered DC characters like Deathstroke, China White, Deadshot and even Batman. Smoak, though, is a character most closely associated with Firestorm, the Nuclear Man--a character that doesn't particularly seem to fit into the world of the series. Rickard's Twitter account indicates that she started shooting her role yesterday. The role is listed as potentially recurring on the series' casting site, but she'll first appear in the series' third episode, which also featured Deadshot. Per the Green Arrow TV site, which puts the character's role in DC history into a nutshell so effectively it seems silly to try rephrasing it:

"Felicity Smoak is a character from DC Comics, first appearing inFury Of Firestorm #23 nearly thirty years ago. In the comics, Smoak was a manager of a computer software company who later ended up suing Firestorm. Oops. "Not knowing about the connection between Firestorm and his half-alter ego, Ronnie Raymond, Smoak ended up in a relationship with Raymond's father and eventually married him."

The site also points out that Rickards is pretty young, and that such a storyline is probably a ways off, if they've even got it in mind, but it's certainly interesting to see Guggenheim, Kreisberg and company sprinkling obscure DC lore into the series wherever possible. It seems likely this particular name may have come out of Kreisberg's hat, considering the Booster Gold series he's writing for Syfy reportedly leans heavily on Dan Jurgens' original 1980s interpretation of the character, and features a number of supporting cast members who haven't been published since (or at least not more than once or twice).