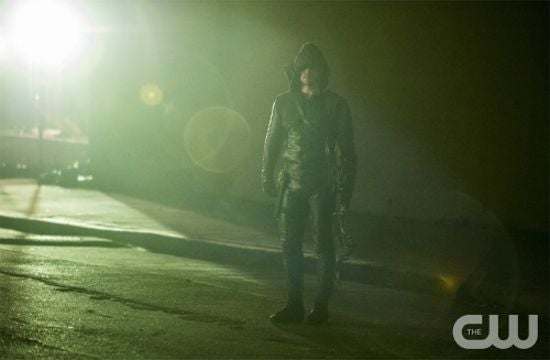 The CW have released an extended, 30-second preview of February 26's episode of Arrow, titled "Time of Death." Then, before we could post that, they released another, even-more-extended, Facebook-exclusive preview of the episode, which runs a full minute. You can see both embedded below. While yesterday's preview for the episode seemed to suggest that it was Slade Wilson "finding a new target" in the form of Sara Lance (who the world now knows to be alive and living in Starling City, following the events of "Heir to the Demon"), there's definitely more to it than that--and it seems as though the Clock King has a mean-on for somebody in our cast. Don't expect a guy with a giant clock face, though, or even those cool clock-face glasses: In his Arrow iteration, Clock King has earned his nickname being a brilliant criminal who plans his crimes with the utmost precision, down to the second. Robert Knepper of Heroes, Mob City and The Hunger Games: Mockingjay will star as the villain.