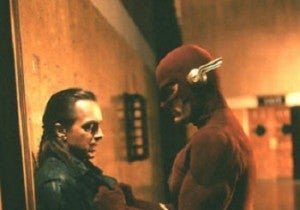 In fact, Katie Cassidy, the woman who plays Laurel Lance on The CW's Arrow, has an actual, off-camera legacy of superhero roles--and not just superheroes but DC superheroes specifically.

In a new interview at Green Arrow TV, even Cassidy was surprised to learn that her father--The Partridge Family's David Cassidy--had played Mirror Master on the 1990s TV adaptation of The Flash.

What she did know--and what's arguably even more remarkable--is that her grandfather, Jack Cassidy, played the villain in the Broadway musical It’s A Bird… It’s A Plane… It’s Superman in the 1960s. If you check out the cast recording on Amazon, actually, Cassidy's is the first and most prominent name listed.

"It’s funny you mention that about my dad," she told the interviewer. "I did not know that! It’s good to know. My grandfather, I did know about. I heard he was amazing in that part."

So, what are the odds our would-be Black Canary might have a genetic predisposition toward evil? Probably not great. She's hoping that the Arrow producers let her embrace her characters' comic book destiny sooner than later.

"I hope it happens," Cassidy said. "I hope it happens soon, because I want to kick some ass. I think it would be fun. Everyone asks me if I’ve been fight training, and I’m not. So I don’t know. I don’t think it’s a good question for Andrew Kreisberg."

Arrow launches in October on The CW Network.

Arrow's Laurel Lance Has a Family Legacy of Superheroes