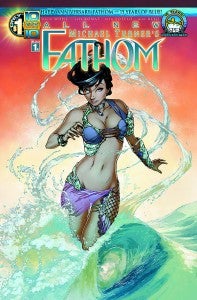 Celebrating its fifteenth anniversary this year, Michael Turner's best-selling Fathom will get a relaunch, Aspen Comics has announced last night. The All New Fathom #1 will be the publisher's sixth title in their successful "10 for 10" initiative. In accordance with the 15-year anniversary of the title, and a planned summer crossover leading into the new series, the All New Fathom #1 will feature a new direction for the series and an excellent jumping-on point for new readers. From writer David Wohl and artists Alex Konat and Beth Sotelo, the series will debut in stores on July 24th. "From the first time I ever heard Michael Turner talk about Fathom, I knew he was onto something very special and very cool. At that point, we were working on Witchblade together, and even then, I hoped that someday I'd have the opportunity to write it," said Wohl. "And now, during the 10th Anniversary of Aspen Comics, I've gotten my chance and I couldn't be more elated!" Aspen's solicitation text for the series is below.

Michael Turner's best-selling series has reached its milestone 15-year anniversary! However, Aspen Matthews' adventure under the surface has no plans of slowing down! Following the devastating events of "The Elite Saga", Aspen Matthews finds herself at a decisive crossroads in her life—with the memories of her past no longer weighing her down, she is finally able to set about building a new life in San Diego once more. But, being the daughter of two worlds is no easy feat—and Aspen will quickly discover the winds of change oftentimes lead directly into the perils of fate!