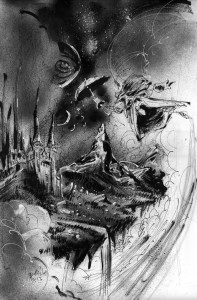 The Adventures of Augusta Wind

, the all-ages IDW Publishing miniseries from writer J.M. DeMatteis and artist Vasilis Gogtzilas, is coming back in 2014, DeMatteis confirmed on Twitter. Posting the image at right, DeMatteis captioned it, "My collaborator, @gogtzilas, warming up for AUGUSTA WIND'S 2014 return." He clarified that the series won't return until late in the year, but that it's gratifying to know that the character's future is assured. DeMatteis currently writes Larfleeze, Trinity of Sin: Phantom Stranger and Justice League Dark for DC Comics. He and longtime collaborator Keith Giffen will soon launch Justice League 3000.

Augusta Wind To Return in 2014