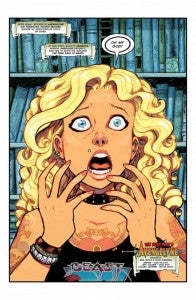 Earlier this week, the Keenspot and Facebook pages for Mark Poulton and Owen Gieni's Avengelyne, based on the Extreme Comics character co-created by Rob Liefeld and Cathy Christian, announced that, for the first time in a month, new pages would be coming soon. This time, though those pages would be previously-unreleased content, rather than a free, web-based reissue of an existing story, which is what the webcomic had been up to that point. That was interesting enough in and of itself, but yesterday, Bleeding Cool was provided with some details as to what, exactly, fans can expect from the new pages:

These new issues close out Mark and Owen's story-arc and have Avengelyne and Passover joining up with Blood Wulf (who will soon be seen in the pages of Bloodstrike as part of creator, Rob Liefeld's return to the series starting with issue 34) to battle the likes of the Red Dragon, Torment, and Priest.

Leaving aside Liefeld's already-solicited return to Bloodstrike (a series which has a movie version currently in development, so the creator's wish to become directly involved is probably not a surprise), the details provided give fans a little bit of insight into the next arc...but also reveal that the unreleased issues, once published, will wrap up Poulton and Gieni's story. Their "finale" will presumably end the webcomic, giving their arc a sense of much-needed closure but leaving fans of the popular webseries at a loss for new content. Poulton and Gieni's series boasts more than 350,000 readers online; those numbers are higher than virtually any print comic from any mainstream publisher in the last twenty years.

Avengelyne's Untold Story To Be Released Free and Digital