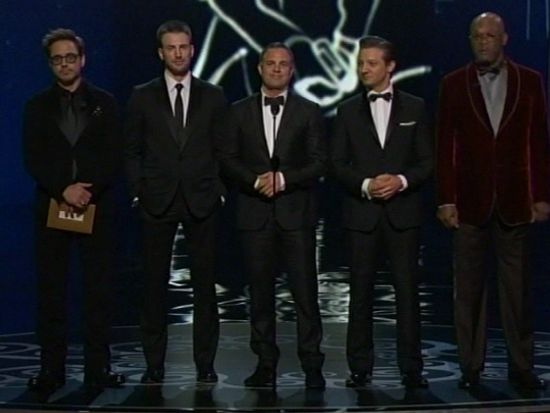 If you’re watching the 85th Academy Awards, several members of the cast of The Avengers just appeared on stage. In introducing the cast, Seth MacFarlane said, “The Avengers was the most popular movie of the year which is why it was only nominated once.”

Robert Downey Jr. continued, “If the film crew is the tribe, then the cinematographer is the shaman, battling the elements, working with light and shadow to convey…” Then, Chris Evans interrupted, “That Robert is as tall as the rest of us by framing out the apple boxes he so often is standing on.”

Mark Ruffalo added, “Or crafting an elegant master that simultaneously conveys story, character, and height equality.” Jeremy Renner said, “Yet, the true abilities of a cinematographer are often tested most when an aging star whose years, make that decades of wanton self abuse, leaves his face looking like a lunar landing surface.”

The Avengers cast presented the Oscar for Achievement in Cinematography to Claudio Miranda for Life of Pi.

After Claudio Miranda made his acceptance speech, Samuel L. Jacksson said, “And here are the nominees for..” Mark Ruffalo interrupted, “You just skipped a big chunk.” Samuel L. Jackson said, “Did I?” Robert Downey Jr. added, “You did. It’s important that visual effects are given the respect that they deserve. This was a huge year for the effects.”