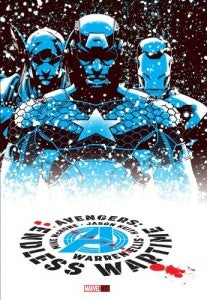 The book, due out in October, deals with "an abomination long thought buried" that has ties to both Captain America's and Thor's pasts. It's not much of an intuitive leap that they probably mean Captain America's World War II past, giving the monster the same kind of sweeping, historical significance that was imbued in the villain of Ron Marz's Green Lantern original graphic novel Fear Itself years ago.

For the most part, the imagery used is the same as has already been seen in the preview pages, so the casual comics fan will be familiar with much of what's offered here, but being contextualized along with the voice over helps to make sense of some of it.

Check out the trailer below; the book is out in October.