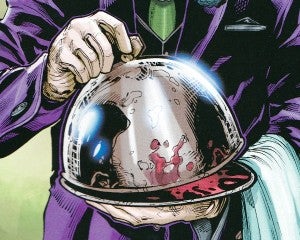 Warning: Spoilers ahead for today's Batman #17.

What do fans really want out of their massive, multipart, multi-title crossover event stories? It's hard to know. Responses on Twitter to the issue, and Death of the Family in general, have been split, with an edge toward the positive, but one of the things that you see over and over again is fans who feel that, after months of hype and build-up, the conclusion wasn't "big" and "splashy" enough for their liking. In the early hours of this morning, I got an e-mail from Barnes & Noble, telling me that my pre-ordered copy of the issue was available for download to my Nook, and read the story immediately. Discussing it with a friend who hadn't yet read it, the conversation was illustrative of what I've suspected since the issue leaked and some disappointed grumbling started to roll through the comics Internet. "I've evaded the spoilers thus far," he told me. "Will I wind up being disappointed?" "It depends on what you want from it," I said, trying not to spoil anything in the much-hyped finale. "I just want a body," he responded. 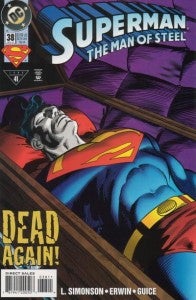 That, in a nutshell, has been much of the criticism leveled at Batman #17--after having killed nobody, with the possible exception of The Joker who will of course survive the un-survive-able fall, we're left with a story that some fans feel didn't deliver on a promise of blood. After all, their logic goes, with eight or so Batman family titles being published every month, stories that promise to "change everything" are clearly meant to take something away. No mere psychological damage can change the way Batman and his amazing friends are written across the whole DC line, under a number of editors. The irony, of course, is that many of the same people upset by the lack of "consequences" are bound to be the same people who complain about meaningless character deaths being thrown into things to give them the appearance of gravity. (This isn't to suggest the particular person I'm quoting feels that way--he just said it so perfectly I didn't want it to go to waste.) It's the same discussion we have over and over again with variant covers or ongoing titles in support of characters that haven't had a good book in years. It's the same conversation we have every time there's a cheap, meaningless death of some character killed only to be brought back at the end of the story and then killed again the next time there's a need for an emotional beat (I'm looking at YOU, Hawkgirl). The problem here is that people buy the very things they complain about. And as it pertains to story developments, not only do they buy them but they also talk about them ad length on the Internet, creating buzz around the book. If Death of the Family had killed off Damian Wayne or Alfred Pennyworth (the only serious candidates, let's be honest), the story would have instantly morphed into a story ABOUT that event in the minds of many readers; it would have undermined the character-building that Snyder and Capullo were trying to do and rendered moot much of what they were trying to say about the nature of Batman and the world he inhabits. Instantly, Death of the Family's Wikipedia entry would have been edited to be "Death of the Family is a twenty-three issue comic book story arc first published by DC Comics in 2012 and 2013 in which Alfred Pennyworth died." It would have overshadowed everything else and any analysis of the story wouldn't be about character and the nature of Batman's struggle with the Joker--issues the creators wanted to broach and which most of the reviews are wrestling with on some level or another. They would instantly have become about whether the death was handled well, and whether Batman should have just finally, unequivocally killed The Joker. And those are fun conversations to have, and they're worth having--but that wasn't what this particular story was about. And frankly, we've had those conversations before. Just in the time since the Internet, we've had them following No Man's Land. Fans have been having them for years when things like The Killing Joke and A Death in the Family changed the game. They're an important, inherent part of the Batman/Joker dynamic and the way fans respond to the characters...but it wouldn't have broken any new ground. Clearly, from the word go, Snyder and Capullo have been itching to strike at the Batman books in a way that would leave a mark. What they've done here is craft a story that might not have consequences that are visible to the naked eye every day, but which will be a touchstone for other writers to come back to for years. It's easy to say, "Well, killing so-and-so would have done that forever!" But when, in eight months, that character came back again, would anyone still feel that way? Let me put it to you another way: Do you want more Countdowns, or more Sinestro Corps Wars?