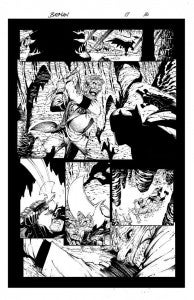 Warning - Spoilers follow for Batman #17 and the rest of Death of the Family.

Following Geoff Johns's lead on Green Lantern, a few of the writers who took over DC Comics following the New 52 relaunch did their best to reinvent the characters' mythology, adding texture and background to deepen and freshen up the characters and the world they inhabit. And while Jeff Lemire has received high marks on Animal Man and Joshua Hale Fialkov has delighted fans with I, Vampire, it's Scott Snyder and Greg Capullo's Batman that has stood out as the most consistently excellent comic of the New 52, while simultaneously fulfilling their promise to examine and enhance what makes Batman special. The Court of Owls and Night of the Owls, after all, were all about adding something to the mythology, crafting something that would fit in with Batman's previously-existing backstory but that could have been missed all along, not entirely unlike the way Johns crafted the Parallax entity into a millennia-old part of the Green Lantern story. That was all some pretty heady stuff, though, and heading into Death of the Family, it felt a bit oppressive. There hadn't been much room to breathe, and Joker has traditionally been a character who tends to work better in smaller, more brutal doses. Luckily for fans, that's what we got today with the release of Batman #17, the final chapter in the story. Tacked onto the end of this protracted, baffling story filled with double meanings and strange twists came a finale that's effective, in no small part, because it plays by the same rules as the story itself. 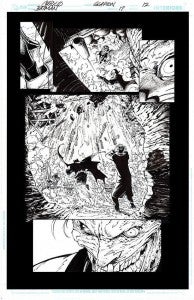 Snyder has talked at some length about the fact that The Joker's schemes in Death of the Family were made to resemble classic Joker stories from the past, and this final issue is no different. One of the things about The Joker that makes him special is what he does to Batman--what he brings out in Batman. The brutality, the hate that Batman has...it's almost Punisher-like, and this isn't the first time we've seen him pounding away on his nemesis and thought, "This is finally it." In fact, following the long setup, the actual fight scene between Batman and The Joker had echoes of Knightfall to it. That, too, was a story in which a master villain (not The Joker that time) manipulated a number of Batman's rogues into delivering an exhausted and mentally defeated Batman to him, right in the comfort of Wayne Manor. And in the last hours of that story, Joker made it personal, invoking the Robin he killed, and Batman snapped, pummeling the clown's face to a pulp while screaming Jason Todd's name. Batman pulled back at the last moment, though, and let reason take over. This time around, it seemed as though Snyder was interested in taking that next step. Ultimately, after having been on the receiving end of about fourteen metric tons of sadism, Batman got a little sadistic himself.  Not just with the beating, but with what came after--he set out to do something that wouldn't just kill the Joker, but which had the potential to unmake him, to unravel what passes for Joker's psyche. And there, we learned The Joker's Kryptonite. While most writers play The Joker as a character with no sense of reality at all, Snyder portrays the character (wisely, as it helped to keep him interesting for fifteen parts or however long the story went) as a man with a very specific reality. It's not the one we all recognize, but it's absolutely essential to him--and interestingly enough, he's completely aware of what a tenuous grasp he has on the reality that keeps "together" and makes him who he is. In fact, he'd rather die than lose it. 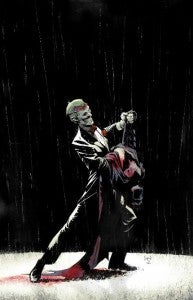 It's a terrific interpretation of the character that opens up any number of new possibilities in storytelling. Which is good because, honestly, Snyder and Capullo slammed a number of doors shut with this story. This almost completely abandoned the Joker we've seen almost nonstop since A Death in the Family--the Joker as total, aimless madman. Snyder's Joker has more in common with the version of the character we saw in that classic story; imagine the Joker we've seen in recent years try to pass himself off as an Ambassador to the United Nations in order to pull off a plan. There's no way. This Joker, though, could do it (except for the whole Leatherface thing). His madness, all throughout the story, had method and even in defeat he chose the way he would lose. If they ever return to the old "He's so unpredictable because he's not thinking ahead" approach, the explanation will have to be a doozy. Greg Capullo was phenomenal throughout, but Batman #17 really took it to another level. The growing grotesquerie of The Joker and and the more-and-more feral look to his eyes and his body language as the story progressed nicely moved along the narrative of a man fraying at the edges, even while he seemed to be in control. That final move in the chess game, taking control back for himself, makes a lot of sense when given that context, especially with that last macabre image that we're left with as he makes his exit from the story. He's also incredibly effective at communicating emotion, giving way to some great silent moments throughout the story. That's particularly important in a sprawling, seemingly-never-ending tale like this that features fistfuls of characters, all of whom could be on the page at the same time. There just isn't a lot of room for exposition in a lot of those panels, and that the art renders it unnecessary should give the reader an idea of exactly how lucky Snyder/DC/the reader are to have Capullo on board. Particularly impressive is the way that he managed to feel like his layouts were fresh and creative without resorting to some of the more innovative and even "gimmicky" things that they had done in the early stages of the book. There are very few odd or unconventional layouts in the story and equally few tried-and-true gimmicks like repeating panels. The layouts and the kinetic, exciting quality Capullo brought to the art also really helped to keep the pace in a story like this. Unfolding over a matter of months that were supposed to be just a few days, these stories were likely to feel a bit like they were palling. Along the way, certain titles did but Batman--the heart of the story--never did. It always felt tense, clever and on the move. Seriously, folks--Scott Snyder receives (deservedly) a ton of accolades for his work on Batman, but Greg Capullo is a first-ballot Hall-of-Famer after this run. The weak point in the story was, it has to be said, the tie-ins. While Kyle Higgins, a terrific writer as well as a friend and collaborator to Snyder before the New 52 began, did well with the Nightwing chapters, virtually everything else felt shoehorned in. It's likely not the fault of the creative teams as much as it is an editorial edict to get as much mileage out of the Joker-centric crossover as possible--but it will likely leave a bad taste in some fans' mouths, after the high concept of Joker's serving trays, which makes sense in the context of what Snyder was trying to do, will likely go over the heads of people who were just reading it to see the brutality and the "Joker dialed up to eleven" aspect of the book. Death of the Family been marketed as a story that will Change Everything, and I don't necessarily see that. I do see it as being a stand-alone story that will endure, with a streamlined version of the collected edition serving as a model for future intra-family crossovers and with the potential to stand as one of the great Batman stories of all time. And the reason it can do that, frankly, is that it explored not just what these characters meant to one another and to the reader, but what the stories have meant to them and to us over the years. The "death" was, after all, as illusory and empty for the characters as it was for the readers; after months of "Who will live? Who will die?", the answer that both we and the Bat-family get is oddly easy. The scars that the family will be left with are (at least largely) metaphorical. That aspect of the story, which lends it some of its timeless, epic quality among a crowded field of events filled with death for death's sake, may be the most infuriating to many readers but it will also be the thing that keeps it from feeling preposterously dated in ten years.

Batman: Death of the Family - A Review