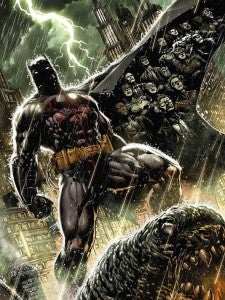 Ahead of New York Comic Con, DC Entertainment announced today via a story in USA Today that Batman will go weekly in a new, ongoing series led by Batman writer Scott Snyder and featuring a rotating cast of other writers and artists. Titled Batman: Eternal, the new weekly series will feature outgoing Detective Comics artist Jason Fabok as the primary artistic influence (he drew the cover of #1, seen at left) and a revolving team of non-Snyder Bat-writers including James Tynion IV, John Layman, Ray Fawkes and Tim Seeley. Apparently that's why Seeley left Witchblade, not to focus on his creator-owned work. Snyder and Tynion will be co-writing the first story arc, which he says explores hidden corners of Gotham not seen often in comics. "You'll see some humongous newsworthy stuff in it, I promise," Snyder told the newspaper. "We're five guys doing our best to give you an exciting Gotham that's changing under the feet of its characters."