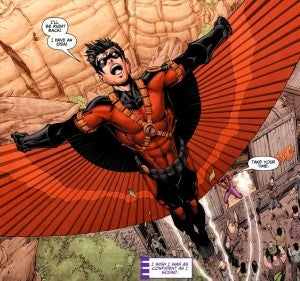 In spite of having the longest-running series of any Robin ever, Tim Drake hasn't had much to do since the Robin/Red Robin title ended and has been largely a shell of his former self in Teen Titans.

The fact that he existed, though, has kept fans from getting too anxious in a New 52 environment where Stephanie Brown, Wally West and other characters are nowhere to be found.

It seems, though, that in the wake of the death of Damian Wayne, the most recent Robin, and the breakup of the Batman family in Death of the Family, Drake will become a major player in the DC Universe once again.

"Tim Drake will be a major character in Batman: Eternal," writer James Tynion IV said simply when asked at the New 52 panel tonight at New York Comic Con whether there were plans for the character in the near future.