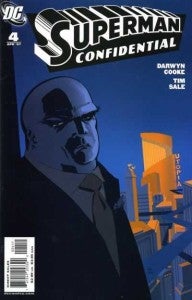 In an article about the recent announcement that the Man Of Steel sequel will film in Detroit, Contact Music drops a potential bombshell. Without citing the source of their information, the website reports that movie might "make possible jaunts to Morocco to film the meteor crash scenes."

The first Man Of Steel contained an Easter Egg, which could suggest the way Kryptonite is brought into the new DC Cinematic Universe. During Superman’s big battle with General Zod, the pair blow past a building that’s illuminated with the logo of the Utopia Casino. In the Superman Confidential comic book series, Anthony Gallo, who owns the Utopia Casino, was the first man to bring Kryptonite to Metropolis, which eventually led to Lex Luthor discovering its effects on Superman and becoming determined to use it to his advantage.

Batman Vs. Superman (which is still officially the untitled Man Of Steel sequel) is set to be released in movie theaters on July 17, 2015.