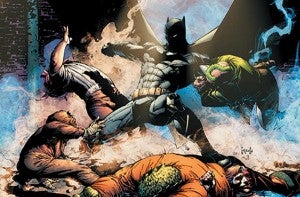 In an interaction with fans on Twitter, Batman writer Scott Snyder seems to have confirmed that he'll write a Riddler story for the New 52, marking the first time the character has appeared as an antagonist in the relaunched DC Universe. Asked by a fan, "Will you please give us a badass Riddler story? He's so cool in Arkham city but nowhere in the DCU," Snyder answered simply, "Yes," the first confirmation ComicBook.com has yet seen that there's a story on the docket for Edward Nigma. "I will use the Riddler in 2013," the writer followed up when a fan asked to which part of the question Snyder was agreeing. The character has appeared briefly on the cover of Batman #1 and in some background shots, where he appears to have question marks tattooed on his head and a green, question mark-shaped mohawk. The mohawk has been a particularly divisive part of the relaunch, with fans mocking the change and criticizing it as "too Nineties." "There was some talk, honestly about the Riddler, maybe making him a character who is scarier in terms of the games he played. Sort of like Jigsaw from the Saw movies," Snyder told ComicVineback in September of 2011. "But at the end of the day we really loved the characters as they are. It came down to instead of radically changing the designs of any of them to people coming up with good stories for the characters as they are. The discussions about this stuff lead to huge fun stories that are coming with the Joker in a really big way, with Two-Face...it lead to us saying we don't need to reboot them because this is the story I want to tell." The Riddler's story begins again in 2013.