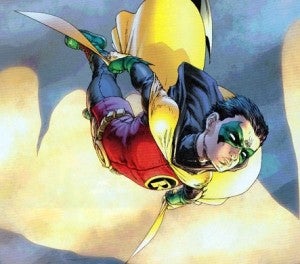 With Big Changes to the Batman family promised for the ongoing "Death of the Family" crossover story featuring The Joker, some fans have been speculating that the tale would feature the death of Damian Wayne, Batman's biological son (sort of) and the current Robin. I'm not sure I buy that theory--or, at least, I don't buy it any more than I do the theory that we'll see Jim Gordon killed. Still, there's some circumstantial evidence and some compelling storytelling reasons why it makes some sense. Let's take a quick look at the idea. Please note that my final point contains spoilers for The Dark Knight Rises, due on video in two weeks. DC is not above pandering to long-time fans with continuity fixes, and Damian is a continuity black hole. When DC introduced the New 52, their characters and universe were all rolled back, and the timeline shrunk. Most of the characters have few, if any, adventures that we're sure they've actually had before. Batman and Green Lantern, though, got to keep a lot of their recent history where others didn't. This happened for two reasons: first of all, Green Lantern writer Geoff Johns and Batman Incorporated writer Grant Morrison, who masterminded much of the last five-plus years of Batman mythology prior to the launch of the New 52, are hugely influential at DC. And second, their books were selling like hotcakes before the relaunch. For Johns's part, it's unclear exactly how much of the history has been retained, and even that which has been retained seems to have been tweaked a bit. Still, Green Lantern hasn't really stopped to take a breath since the relaunch, and even its zero issue in September wasn't the kind of navel-gazing that drove so many of those books but rather an opportunity to introduce a new character. Morrison, on the other hand, has a finish line in sight. He has an uber-arc that he's been wanting to tell for years and it's so close to being finished that he's not going to screw around with it in order to appease the continuity police. He's just chugging right along, writing the same story he's been writing for years, relying on continuity that doesn't exist and characters who haven't been introduced yet. DC's letting him do it because, frankly, it's still selling. And it does better in the bookstore market than almost anything else on their slate. But this is DC Comics - the company that has retconned a dozen beloved characters because their timelines don't jive with the all-important master plan of the New 52. And Batman, the most valuable comics and film property they own, is a stubborn nail just waiting to be hammered down. More specifically, Damian is. The earliest stages of Bruce Wayne's career as Batman make very little sense in the New 52, and a lot of that revolves around having an age-inappropriate son wrapped in a Batman cowl. And speaking of age-inappropriate... Wally West makes The Flash--his UNCLE by MARRIAGE-- too old, but Batman can have a kid in a cape? Really, just think about that for a moment. The age of Wally West has absolutely nothing to do with the age of Barry Allen. Wally is the son of the brother of Barry's crush. In high school, I dated a 15-year-old girl whose sister was 2. Let's say Linda's the two-year-old in that scenario, and that means by the time she's 18, there's zero reason that her brother can't have a kid at least as old as Damian. But I digress. The real point here is that Damian flies in the face of stated, established New 52 philosophy. They want their heroes to be younger, and having a kid old enough to be Robin calls attention to the fact that Batman is closer in age to your dad than he is to you. Grant Morrison is leaving. He's got this massive idea for a Batman story he wants to tell, and he's telling it. By now, he's probably done with it, since he's finishing up his run around the same time as "Death of the Family" ends. And, like anyone who's worked in comics a while, he should know that as soon as he cedes control of the franchise to the next guy, they might kill his babies. It's just what happens. Morrison leaving doesn't mean Damian will die, but it means that it's far more likely he might. 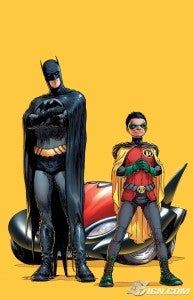 Why not kill a Robin? It'd be what people kind of expect. "Death of the Family" was chosen as a title with a specific homage to "Death in the Family" by Denny O'Neil, Jim Starlin and Jim Aparo. In that story, Joker took out Jason Todd, who was then Robin. There will be some who really, really expect this story to end with the death of a Robin. They didn't hint at Damian in the movie. This one is a bit of an abstract thing, but DC is in the business primarily of upkeeping trademarks for Warner Brothers at this point. And even with that, and with Talia al Ghul appearing in the film, there wasn't even the slightest inkling that during the "missing" months when Batman has his back injury Talia may have been pregnant, etc. It seems like that would have been a perfect opportunity to tease the possibility that Batman could have a kid and therefore have a legitimate reason for a kid sidekick to the larger audience. No such thing happened. Maybe Warners isn't that interested in a Batman who's tied down in that way.

Batman's Death of the Family: The End of Damian Wayne?