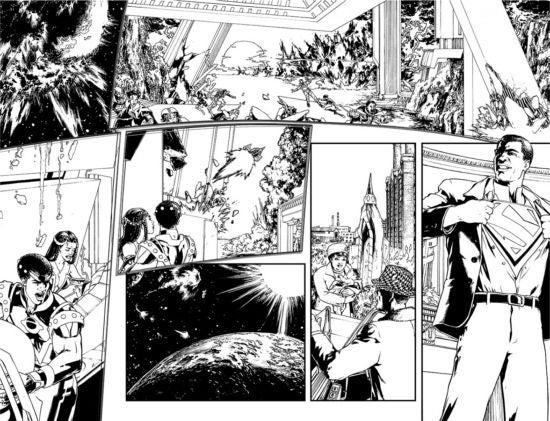 DC Comics has released some artwork from the upcoming Action Comics #9, which reveals the first black Superman in the relaunched DC Universe. As part of the New 52, DC Comics previously launched an ongoing series called Batwing, which features the first black Batman. In a twist though, the new black Superman is not part of the main Earth of the DC Universe, but rather his adventures will take place on an alternate Earth. Action Comics #9 will feature the black version of Superman in both the main story and a back-up story. The main story will be written by Grant Morrison with art by Gene Ha. The back-up story will be written by Sholly Fisch with art by Cully Hamner. In the main story, the alternate Earth Superman will fight a monster from another parallel world, which turns out to be a Superman surrogate known as Superdoom. While the back-up story will also feature the alternate Earth Superman, the storyline for it has not yet been revealed. Even though Action Comics #9 marks the first appearance of a black Superman in the new DC Universe, it is not the first time a black version of Superman has appeared in a DC Comic. In a pre-relaunch series called Final Crisis, an alternate Earth black Superman was introduced who was also President of the United States. It will be interesting to see if the black Superman featured in Action Comics #9 turns out to be the same black Superman that appeared in Final Crisis before the relaunch. One of the panels does give the appearance of the Oval Office in the background. It will also be interesting to see if DC Comics gets any mass media attention from featuring a black version of Superman in Action Comics, because Marvel Comics attracted quite a bit of press coverage when they premiered the first half-black, half-hispanic version of Spider-Man as part of the Ultimate Universe.