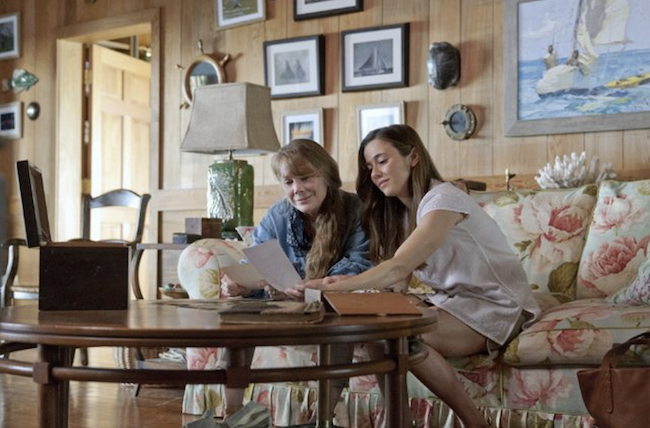 The fifth episode of Bloodline begins with Danny (Ben Mendelsohn), dreaming of his attempt to save Sarah when he was younger. Outside, Robert has another stroke and dies. Danny finds his mother Sally (Sissy Spacek) with Robert’s body in her lap on the beach.

That night, Danny cancels his upcoming flight to Miami. The other siblings all join Sally and Danny at the hotel. John (Kyle Chandler) asks Danny what he and their father discussed at the restaurant, and Danny just tells him that Robert wanted him to have more inn responsibilities.

Sally explains that Robert didn’t want a big service, but John points out that people will want to pay their respects somehow. She agrees to something small but insists that the only person who can give a speech is John himself.

Meg and Sally comb through old photos of Robert to choose a select bunch to display at the service. Sally wants to put up a picture of Sarah but Meg (Linda Cardellini) is unsure.

Danny later goes to a diner with Chelsea (Chloë Sevigny), who wants to know if this means he’s sticking around. When he sees an old, visiting friend of his father, Lenny Potts (Frank Hoyt Taylor), he tells Cheslea that they need to leave and heads back home, where John is working on his speech. Danny seems to want to say something at the service too – but John thinks he doesn’t need to.

When John tells Sally about Danny’s intentions, she agrees that he shouldn’t speak. John asks her what Robert’s life was like when he was growing up. She tells a story about Robert’s father, who used to beat his stepmother. Robert tried to fight his father in her defense, ultimately stabbing him in the throat with a grilling fork and almost killing him.

At the service, Kevin (Norbert Leo Butz) tells Meg that his wife Belle won’t be there, because he told her not to come – but not then she appears. He pulls her aside and an argument ensues, with her eventually accusing him of being just like his father. Kevin demands that she leaves. Eric (Jamie McShane) and Chelsea attend the service as well, though Danny says they probably shouldn’t be there.

John gives a moving speech from the heart, disregarding the speech that he wrote ahead of time. He admits that Robert could be a very harsh guy and that he was a demanding father. In the midst of the speech, he remembers the Sarah incident, which included Robert beating Danny. His speech ends, and Danny decides not to add to it. Meg gets a call from Alec (Steven Pasquale) shortly after, whom she tells to never call her again.

Lenny, who used to be a detective in the local sheriff’s department, gives his condolences to John and his wife Diana (Jacinda Barrett), who suggests John pick his brain for advice on the case. Danny’s having a drink by himself near the shore when Lenny approaches to share condolences with him as well, and there’s an obvious tension between them.

That night, John fills in Lenny on the details of the burned bodies case. He tells John about a case a long time ago, where a missing boy’s body was found 50 miles north of where he went missing, because it was pushed by the current of the Gulf Loop. They did a study on these patterns, which is still in the archives and might help John.

Lenny reveals that he and Robert had a falling out over a disagreement that happened around the time Sarah passed, adding that Danny was injured.

At the bar that night, Kevin vents to Meg and Marco about Belle, saying that he’s happy it’s over because now “he’s free.” He tells Danny the same, even taking off his ring. Kevin gets increasingly drunk, flirting with Chelsea and annoying Eric before stumbling off and driving the truck home to Belle. He opens with an apology and just keeps saying, “I’m sorry,” until she embraces him.

Danny is shown hours later lying next to Chelsea, but he doesn’t stay there overnight. In the morning, Lenny stops by to say goodbye and specifically to talk to Danny. He indicates pretty clearly that Robert seriously injured Danny after the Sarah incident. Lenny admits that he knew “what happened to” him, apologizing for not doing anything about it.

He adds that there’s something Danny needs “to hear,” handing him a cassette tape recording of an interview Lenny conducted with John shortly after Sarah’s death. Danny gets into his car, pops the cassette tape in the player, and listens to the interview.

At the same time, John visits the archives in the morning to locate the study that Lenny told him about. It doesn’t tell him much – but on the way out, he noticed a box labeled something along the lines of “Rayburn accident.” Inside the file, he finds old photos of young, injured Danny, along with a transcript of an interview Lenny had with young John. He reads the interview, while Danny is listening to the same interview back at the hotel:

Young John says he was there “when Danny got hurt,” saying that he was struck by a car and adding that his father was in the hospital with his sister at the time. Lenny pushes him to tell the truth, but he doesn’t yield.

John realizes that the tape recordings of the interview are missing from the file. He looks at a check-in sheet for the archives and finds Lenny’s name on the list.