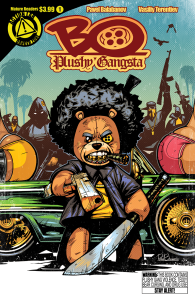 The series will be written by Pavel Balabanov and Vasily Terentiev, with art by Balabanov. It's about...well, pretty much what you would guess by looking at the cover at left.

It's also, unlike much of Action Lab's offerings, not all-ages friendly--as you'll see in the trailer. The solicitation information is included below the video. 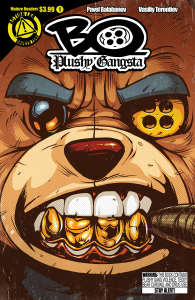 Are the legends of Bo, the “teddy bear” gangsta, true? And, did we just say teddy bear gangsta?! You’re about to find out--when Bo’s girls get nabbed by a rival gang boss, the mysterious and fearsome plushy gangsta is forced into action! It’s Scarface meets Ted in this over-the-top video game style urban epic. Also ships with a variant cover by Balabadov! Bo features an amazing superstar artist in the making, in this first comic work from a Russian video game artist, Pavel Balabanov! From Russia with thug!! FC/ 28 pgs./2.99 US On sale Jan. 16th