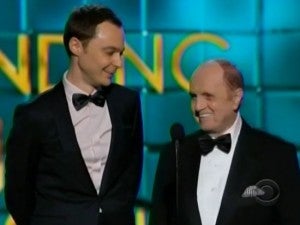 When Jim Parsons and Bob Newhart appeared on stage together to present the Emmy Award for Outstanding Writing for a Variety Series, Parsons made mention of Newhart winning his first Emmy Award. Newhart won the Emmy for Outstanding Guest Actor in a Comedy Series for his appearance as Professor Proton on The Big Bang Theory.

“It’s a thrill for me to present this award with this TV legend, who won his first Emmy just last week,” said Parsons. In one of the most heartwarming moments of the 65th Annual Emmy Awards, the entire audience applauded and rose to their feet to give a standing ovation to Newhart.

After thanking the audience, Newhart quipped to Parsons, “I don’t know if that’s a compliment or if you’re just trying to rub it in.”