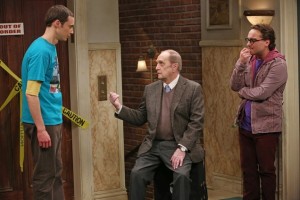 Having been nominated six times without a win (a record), the star had previously removed The Bob Newhart Show and later Newhart from contention, "to avoid disappointment," reports Deadline.

"Well, this is from your peers," Newhwart said last night after the win. "When they say you’re good, it means something special."

Newhart appeared on the show as Professor Proton, although when he returns this season, that might not be who he's playing; he said that's up to showrunner Chuck Lorre and the show's writers.

It was Lorre who courted Newhart to join the show, the report claims, describing the process as follows:

“He asked what it would take to get me to do one of his shows,” Newhart said, “and I said it has to be (something shot) in front of a live audience.” When offered a shot at The Big Bang Theory, Newhart jumped at it, calling the series one of the best-written shows on TV.

The 85-year-old comedian has understandably slowed his output somewhat in recent years, but starred as the title lead in his own network sitcom virtually nonstop from 1982-1993, while serving as one of Johnny Carson's go-to fill-ins and keeping his stand-up career alive. In 2003, he appeared as Papa Elf in the Will Ferrell vehicle Elf, and has recently done a number of guest-stints on TV series not unlike what he did with The Big Bang Theory.