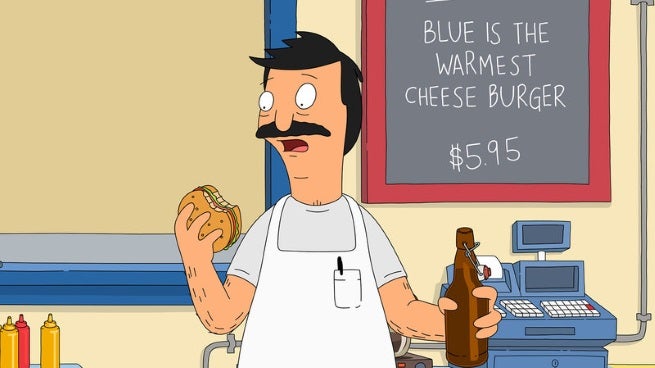 Soon, fans of Bob’s Burgers will be able to put a little bit of the show’s magic on their cookbook shelf. After two years, The Bob’s Burgers Experiment blog, which attempts to recreate many of the pun-named burgers that appear on the fictional restaurant’s chalkboard menu, will have its recipes collected into a an actual cookbook.

The experiment was begun by Honda engineer Cole Bowden, who began the project when he was still finishing college, and had little culinary experience.

"I mean, I knew my way around a frying pan," he tells NPR’s The Salt, "but pretty much just how to put things into it and heat it up."

The blog has attempted to recreate such burgers as “I Know Why The Cajun Burger Sings,” the “Bruschetta-bout it Burger,” and the “Blue is the Warmest Cheese Burger,” with mixed results. Nonetheless, the blog garned many fans, including Bob’s Burgers creator Loren Bouchard.

"I loved [the blog] ever since I heard of it, which was at its inception several years ago," Bouchard says. "It was maybe the best example of how doing a show in the age of the Internet can be such a satisfying experience."

The book is still in the early stages, and without a release date, but Rizzoli has signed on as publisher.

Bob’s Burgers is in its fifth season, and airs Sunday nights on Fox.

Bob's Burgers Recipes To Be Collected In A New Cookbook