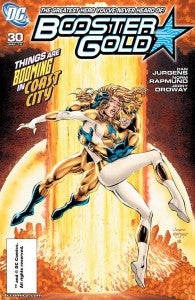 This week’s Booster Gold #30 sheds a lot of light on Rip Hunter’s decision-making process and the elements at play behind the scenes in the story. An action-packed story with guest art by Jerry Ordway for about 75% of the book, Booster finds his sister in Coast City shortly before it’s destroyed by the Cyborg Superman and must take her and get her home, all the while struggling with the ethical questions around leaving millions to die while the city is destroyed. Of course, it’s inherent in Booster’s mission that he has to do let the city burn–but, as Sondra Crain reminds him, it’s pretty unheroic to just give up hope and let people die.

At the same time, we start to find out what’s going on with that creepy guy who’s been walking around with a “The End is Near” poster and a ball cap for the last few months. Does he actually know something about Coast City’s future? And what does he have to do with Booster Gold’s mission? We talked to Dan Jurgens about his second-to-last issue (for the time being) on the title.

Dan Jurgens: Yeah. Having the improved paper, coloring and separations is a real treat. We used to fight for advantages like that and now we get them all the time. It was great to be able to have the explosive spheres rendered as spheres.The Gold Exchange: Hi-Fi did a great job with this issue; how nice is it to be able to revisit one of the great storylines you’ve been involved with, and to do so with all the technological advances of today? 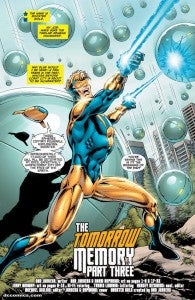 GX: That said, is it fair to assume that as much as we love Norm and Hi-Fi, you wouldn’t want to “remaster” the old stuff?

DJ: You’re exactly right. The intent is to evoke the old stuff and just make it a bit more practical with updated modeling and detail. Now, one day, it would be great to see the old stuff reprinted with better paper and coloring but that day hasn’t yet arrived.

GX: Why did Jerry Ordway end up coming in to help out on art chores this month?

DJ: We knew we needed help. Both “Blackest Night” tie-ins were 30 pages long, which added to my writing schedule. In addition, the mere act of tying into an event slowed us down a bit. I had also started working on a couple of upcoming projects and knew I wanted to handle #31 all by my lonesome so we asked Jerry to step in. The wonderful irony in that is he had just left the Superman books when we did “The Return” so here, all these years later, he finally got to play with it a bit.

GX: Kind of tying those two questions together: Was it kind of a drag, after knowing for about a year that this story was coming (we discussed it at the New York Comic Con), to have to hand off some of the pencils, or were you just happy to get someone as capable as Jerry to handle it? 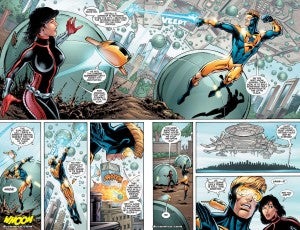 DJ: I’m always disappointed when I don’t get to produce something myself. However, if I do have to get a helping hand, I can’t think of anyone better than Jerry. It was appropriate for a number of reasons.

GX: Sondra’s philosophy actually has some meat to it: Certainly if she were plunging into her own certain doom and not trying to alter the timeline, but just trying to save as many people as possible before she died, she’d fit right in with the most revered heroes in the DCU. As Booster questions the validity of Rip’s philosophy, I have to ask: Since it’s Booster’s book, are the readers to necessarily believe everything Rip has to say?

DJ: The real question is, should Booster believe everything Rip has to say?

There’s a certain practicality to Rip’s arguement that changing events of the past would usher in chaos. It might even be possible for such an action to create an even worse event down the road.

But Booster’s growing doubt over Rip’s iron cald approach to these matters is valid as well. It’s a growing element within the book. 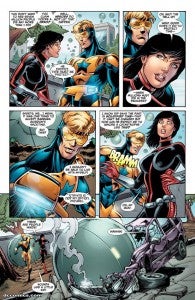 GX: …Skeets, of course, knew how Booster’s “secret origin” was going to turn out and kind of played at trying to stop him, only to accompany him to the past and help the hero establish himself here (in the first volume of BOOSTER GOLD). Any chance that Skeets is more playing a role than actually debating with Booster when it comes to Rip’s guiding philosophies?

DJ: The version of Skeets we’re now dealing with was fully programmed by Rip.

Read into that what you will.

What Booster doesn’t realize is that he’s being controlled much more than he thinks. All part of the training.

GX: Is it possible that Gracey was always meant to be saved because history “knew” that Sondra would be there, in much the same way that Booster was always “supposed” to go back and mess with the 20th Century?

DJ: Yes. I think we made that generally clear. My general theory is that if you went back to the original Superman issues that dealt with the destruction of Coast City, all the stuff we just saw with Booster was happening there as well. It was simply happening off panel. It would be possible to edit the two issues together and have it be consistent and whole.

GX: Will we see Sondra again soon? Since Skeets fixed her time-belt-thingie instead of just zapping her back home, it seems like a dangling plot thread just waiting to happen. 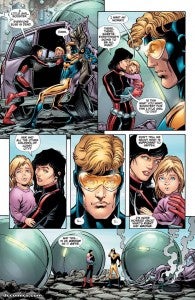 DJ: Of course! Doesn’t every good writer want to leave the door open just a crack?

GX: I really want to give Jerry Ordway a hug for his attention to detail and consistency—Mongul’s navigator, the shape of the guns, the position the Cyborg takes when he blasts the Eradicator—everything was pretty much dead-on. Was that important to you, since you’re the original artist and so of course any subtle change can always be assumed to be a temporal anomaly by paranoid readers?

DJ: I didn’t ask Jerry to be that precise. He’s simply that good and conscientious that he did that on his own. I suggested the tie-in points to the past in the script but he went above and beyond the call of duty.

As for temporal anomalies, yeah, that would be a reasonable approach. We don’t want anyone feeling too paranoid.

GX: Is it safe to assume that Michelle’s abrupt departure at the end of your run will have something to do with her emotional separation from Drew in this issue?

GX: I just *knew* that baseball-cap-guy was going to turn out to be pretty important to the story. Can you shed some light on why he blasted Booster the way he did instead of some other form of intervention? Was it important that the effect not only on Booster but on Drew was just what he accomplished?

DJ: Elder Booster accomplished exactly what he wanted to have happen. I wouldn’t say he blasted Booster at all. It was more of a tap that pushed him over to where he needed to be.

Elder Booster directed both younger Booster and Drew exactly as he wanted and got the precise result he desired.

GX: That said, how Macchiavellian is this whole plan? Obviously Booster’s future self knows what Booster is going through at this point in the story; is it his intention to drive a wedge between Booster and Rip, to play on those doubts to a specific end…or is that just the secondary effect of doing what had to be done in the moment?

DJ: The fact that elder Booster and Rip got along so well at the end of the story would suggest that there is no wedge between Booster and Rip, nor does he want to put one there.

What you’re seeing is that the guidance and development of young Booster Gold is of greater importance than he realizes. We’re definitely putting building blocks for the future in place here.

GX: So…this is the first real confirmation that Booster will one day know what Rip does. It’s also interesting in that a lot of people took for granted he’d die young on the superhero field after seeing his skeleton in “52.” Between how we see him at the end of the issue, and the comments about Rip’s mother and aunt, were you kind of building in a whole history and a happy ending of sorts, in case you don’t get to come back to the title right away?

DJ: I think it would be more important to say that we’re building a history and ending consistent with the long term vision of the character. In BOOSTER GOLD #25, VOLUME I, we established that Booster’s survival and general progression to something far bigger was crucial.

It’s worth mentioning that Booster himself is unaware of this fact, but the track we’ve put him on his been consistent for a long, long time now.

GX: A couple of things you’re obviously planting for later with Rip’s and Michael Carter’s conversation at the end: first of all, you cite both the Multiverse AND Hypertime. Do you have plans to look at how the two interact at some point? I was always of the impression that Hypertime was kind of a poor-man’s multiverse for when we didn’t have one—but having it IN the Multiverse just seems like it could be the source of many, MANY anomalies.

DJ: Without giving anything way… yeah.

GX: Secondly—the conflict that’s simmering. Would that have anything to do with the Linear Men?

DJ: Quite possibly the Linear Men and a whole lot more.

GX: And one clarifying point: Are we positive that this Michael is OUR Michael, given the vagaries of HAVING a Multiverse? Is it possible that the happy ending I alluded to earlier might not be in the cards for OUR Booster Gold?

DJ: It’s very possible that this is the one, uncompromised future Booster. Or it could be that he’s crossed over from another universe or timeline. Or an imposter. Or even that Rip was tripping on mushrooms and no one was even there.

Booster Gold #30: “Things Are Booming in Coast City, OR Rip was tripping on mushrooms and no one was even there.”