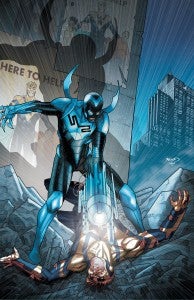 There's a very limited number of comics that DC allowed to keep their pre-Flashpoint logos in the world of the New 52, but apparently one of them is Booster Gold. The character might not actually have a title of his own, but a recent guest appearance in Blue Beetle featured the Booster Gold (volume 2) logo, designed by letterer Rob Leigh on its cover, as a means of announcing that Booster would guest-star in the issue. As someone who dropped Blue Beetle after the first couple of disappointing issues, I have to say it was pretty easy to get right back into the swing of the title. So from the old "every issue is someone's first" yardstick, writer Tony Bedard and company did a pretty good job with Blue Beetle #11. The issue was, overall, a step up from the kind of quality we saw a year or so ago but it's still not a book that's without flaws. And a number of those flaws relate to a lack of understanding of the "new" part of the New 52, indicated primarily by Bedard's desire to return to the old "Blue and Gold" status quo in spite of interviews less than a year ago indicating that the characters would do better to establish identities separately in the New 52. A sequence that takes place in New York, where Jaime is apparently now hanging out, is filled with background lettering gags. It's hard to guess whether it was Bedard or letterer Steve Wands who inserted them, but every gag they went for was "too clever by half," as Pierce Hawthorne would say, and you're left with a one-page sequence with at least three instances of trying too hard. Plus, somebody appears to be trying to mythology build a little bit too much. After almost a year of the New 52, I would be absolutely astounded if Sun Doller Coffee hadn't shown up as the official DCU Starbucks analog yet, so when someone creates "Moondollar," it doesn't feel clever, it feels like they're trying to tell us this scene takes place in a very boring version of Earth 2. Booster suffers some of the same problems he always has in this issue; it's not clear from the story how much is known, and by whom, about the nature of Booster's powers, origin and the like. Yes, the fact that it's widely rumored but unconfirmed that he's from the future fits in here nicely, and that's something Booster Gold creator Dan Jurgens explored in Justice League International at least once. It also seems clear that both his "corporate crusader" identity and his "greatest hero you've never heard of" variation are somewhat present here, with Booster coming on TV to shill his soft drinks and Director Bones calling him an idiot. But the revelation that most people know Booster doesn't have any powers--made when an anti-metahuman activist acknowledges that Booster's just like everybody else under the suit--seems like a pretty telling thing for a writer to drop who doesn't have any apparent long-term claim on the character. One of the original parts of Booster's premise is that he travels to the past and convinces people that he's got powers using future technology. And while none of his powers seem particularly organic, and so it's likely that some people would guess, it's always a bit of a downer when you find out that apparently he's been outed along the way without the story ever having been told. The question of the Reach invasion, something Booster foreshadows in this issue, is an interesting one not only for Blue Beetle but for the Green Lantern family of titles, as well, where a number of the spacebound Lanterns have come into conflict with The Reach. It seems like a no-brainer to make this a one of those family-wide crossovers that could connect Beetle with some of the rest of DC's space books. The issue's story also ties directly into the events of the forthcoming Justice League International Annual #1, following a rather ludicrous attack on Booster by a group of civilians with connections to Jaime which led Booster to reconsider his overly-combative approach to the Beetle. It's difficult to say exactly what it is that we should expect from the Annual, although given that the story is written by Geoff Johns and Dan DiDio, it seems likely the time and place Booster specified for Beetle to meet the team was probably not chosen arbitrarily. Pretty good odds that the bosses told Bedard, "Here's where we're leaving this issue." Lastly, Paco's Blood Beetle identity returns to the pages. As a fan of Booster Gold, it's nice to see that they've stuck with the idea of differentiating him from the Booster villain The Black Beetle, someone that many fans had speculated was actually Paco in disguise. While it appeared as though the writers of the Blue Beetle backup features in Booster Gold had that in mind for a while, it's clearly not where Booster's story was going with the character, and so if you're going to cling to the same dusty old tropes, it's nice to see that you at least properly separate those two characters. And that's really the thing--the New 52 is not, and never really has been, particularly new. In what has felt like a disorganized mad dash to get every DC character ever created back into play in time for the first big crossover, writers have been far too game to embrace the old continuity, even when the bits they're referencing don't seem to have any apparent usefulness to world-building, and could just as easily have been rewritten in a new and creative way. It's a bit exasperating, and it was difficult to put my finger on exactly why--until I saw it up close and personal with some of my personal favorite characters.

Booster Gold, Blue Beetle and the Continuity Snarls of the New 52

Massive Asteroid Flew By Earth Before Scientists Even Saw It