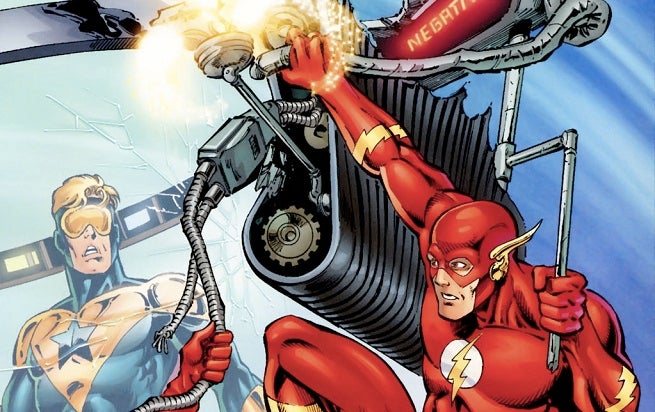 During a Q&A session today with reporters, DC Entertainment Chief Creative Officer Geoff Johns said that the chances are "probably pretty good" that time-traveling, self-promoting superhero Booster Gold will appear on the series.

He didn't elaborate, and nobody much was looking to start that conversation. When the name came up, we're told half the eyes in the room -- reporters and the show's creative staff -- turned to actor Tom Cavanagh, who plays the enigmatic S.T.A.R. Labs founder Harrison Wells -- a character not found in the comics.

Barry "The Flash" Allen and Booster Gold have actually shared the comics page very few times, considering their respective long publishing histories and prominent placement in the history of the Justice League. Booster was the first major DC Comics hero introduced following the events of the Crisis on Infinite Earths, in which Barry Allen died, meaning that between Booster's first appearance and Barry's return 20 years later, there wasn't much opportunity for the two to team up. Booster, drunk on whiskey from a trip to the Old West, rear-ended The Flash's time-traveling Cosmic Treadmill with his Time Sphere in a 2007 story, though, and the two shared some "screen time" in the final issues of Booster Gold, which tied into Flashpoint, where Barry and Booster were the only DC superheroes to appear in a non-time-altered form.

Booster Gold has previously appeared in live action on Smallville, also on The CW. At one point, The Flash showrunner Andrew Kreisberg was writing a pilot based on the character for Syfy, but it's been years since there was any movement on that, and the possibility of an appearance on The Flash likely indicates that the project is dead.