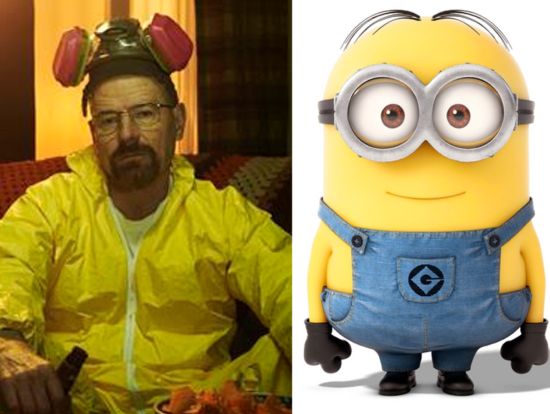 Google has released their 2013 list of the top trending searches for Halloween costumes on Google Shopping, and it looks like there will be lots of meth dealers and little yellow minions running around this year. In a trend that shows the diverse taste of the American public, the top two trending costume searches on Google Shopping are "Minion costume" and "Breaking Bad costume." The Minion costume searches are of course being driven by the cute little yellow minions that appeared in this summer's blockbuster Despicable Me 2. And the Breaking Bad costume searches are being driven by the popularity of AMC's Breaking Bad show, which wrapped up its five season run recently. According to Google, searches for "Breaking Bad costumes" are nearly three times higher this year compared to last year. Looking at the remainder of Google's trending costume searches, it becomes obvious that pop culture plays a huge role in how people dress for Halloween. Following the Minions and Breaking Bad on the list are searches for "Fox costume," "Duck Dynasty costume," "Miley Cyrus costume," "Minecraft costume," "Daenerys costume," "Batman costume," "Gatsby dress costume," and "Daft Punk costume." If there is one big surprise on the list, it's the lack of traditional monsters on the list. Werewolves, vampires, witches and even zombies are completely absent from the list. The lack of zombie costume searches is especially surprising considering the popularity of AMC's The Walking Dead. On the comic book side, it's also surprising that Iron Man and Superman failed to make the list, despite both characters having blockbuster movies this past summer. However, Batman did make the list with searches trending up 36% from last year. Google notes Batman is a perennial favorite.