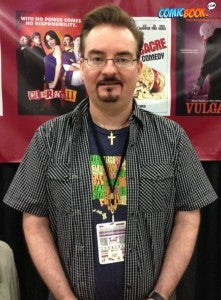 At Fandomfest in Louisville, Kentucky last weekend, Comicbook.com caught up with Brian O’Halloran, who played Dante Hicks in Clerks I & II. Kevin Smith recently completed writing a script for Clerks III, but it’s still up in the air as to when Clerks III will be filmed and released. Most recent statements from Kevin Smith seem to indicate that he will be filming another movie called Tusk before Clerks III.

In regards to the latest on Clerks III, Brian O’Halloran said, “Kevin, as of this date, here in the end of July, Kevin has sent out the scripts to myself and everybody involved. And I’ve read it, and I think it’s going to be one of the best things we do once we figure out the logistics of where we’re going to shoot it and who’s producing it and stuff like that.”

Brian O’Halloran continued, “Hopefully, we’ll get it started shooting in the fall and then hopefully maybe be out the beginning of next year. But I hear that Kevin is also working on another film called Tusk so we’ll see which one he does first.”

When we asked how the new script compared to the other Clerks movies, Brian O’Halloran replied, “I wouldn’t put a comparison to the other Clerks. It’s a continuation of how they’ve grown as adults. You know, as we last left off from Clerks 2, the Dante character especially, has now a new born baby on the way. They’ve been able to raise the funds to buy the convenience store and the video store again, so it picks up from there. So you see where it carries them through that movie. It’s definitely something that the fans won’t expect where it goes. And I think it’s really a great, heartwarming story in the end.”