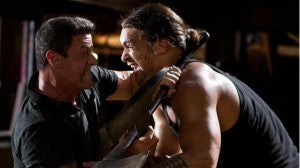 For years, fans wanted to see Sylvester Stallone and Arnold Schwarzenegger face off in a battle for the most testosterone-fueled leading man of the '80s.

Well, now that Stallone's Expendables franchise has finally put the two onscreen together, we get a variation on the theme: Stallone squaring off against Jason Momoa, who took over the role of Conan the Barbarian after it had been abandoned by Schwarzenegger--and who is now, in an odd twist, Arnold's predecessor as the Austrian actor returns to the role soon under director Paul Verhoeven.

The scene takes place in Bullet to the Head, a new movie based on a Belgian graphic novel that hits theaters on Friday.

"It was just amazing and I mean Stallone is just a legend," Momoa told Digital Spy, who debuted the clip embedded below. "It was a dream to work with him and my fight scenes with Stallone, it was like you just stop and pinch yourself and say, 'I can't believe I'm fighting Rocky right now'."

While the pair have an exciting axe fight later on in the movie (which is better than a sword fight because axes), this particular clip is more about psychological damage, as Stallone's Jimmy Bobo gets a phone call that gives him additional motivation for his roaring rampage of revenge.

"When you watch the movie, you’ll see even though there’s a lot going on with action and shooting, each character has his own true arc," Adewale Akinnuoye-Agbaje, who plays the villainous mastermind Morel, told ComicBook.com in a recent interview. "You get to feel them within that ninety minutes, which I think is a real accomplishment for that genre."

Bullet to the Head Video Pits Rocky Against Conan

Playstation 5 Fans Upset at Gamestop Spark “Not a PS5” Trend