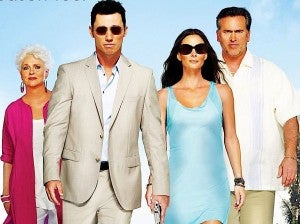 The series finale of Burn Notice scored the highest ratings for any scripted series on Thursday night and the third-highest ratings of anything on TV, clocking in behind only the New York Jets/New England Patriots game on NFL Network and CBS's Big Brother. It was also the highest-rated episode of the season for the veteran USA series starring The Evil Dead's Bruce Campbell, whose character Sam Axe starred in a stand-alone direct-to-video movie in 2012 and who may be featured in a spinoff series if creator Matt Nix gets his way. The series is one of only three ever to cross the 100-episode mark for USA, in company with Monk (its series finale scored more than 9 million viewers and remains the highest-rated in the network's history) and Psych, which is also expected to end after its currently-filming season, although no official confirmation has come down from USA on that yet. Burn Notice will likely continue to live in on in mass market paperbacks, as Monk has. The characters in Burn Notice have also appeared in a number of digital comics, but it's unlikely that those would continue considering they were used primarily as marketing tools for the TV show.