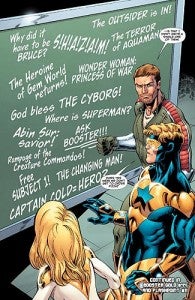 At a pair of DC panels today, it was revealed that a pair of fan-favorite characters are starting to edge back toward their pre-New 52 status quo. Both Booster Gold and Tim "Red Robin" Drake, who had their own titles before the New 52 relaunch with their own unique roles in the DC Universe and then gave that up to lead a team in the post-Flashpoint Universe, were briefly addressed by creators close to them today. When asked by a fan at this morning's DC All Access panel whether Booster Gold was a Time Master in the world of the New 52, DC Entertainment Chief Creative Officer Geoff Johns answered, "He's always a Time Master." Perhaps it's not surprising, given that it was Johns who took Booster Gold out of the workaday superhero world and turned him into Rip Hunter's protege, but many fans have wondered whether that role could survive the massive changes made to the DC Universe after Flashpoint. Makes you wonder what Skeets has been doing at the "Boostercave" this whole time while Booster has been leading the Justice League International, doesn't it? Tim Drake got a similar treatment at the DC Comics: The New 52 panel, with Newsarama reporting that Batman: The Dark Knight #9 will see his character reintegrated into the Batman family. Having been Robin for quite some time, and then Red Robin, Tim has spent all of his on-the-page time since the DC relaunch hanging out with the Teen Titans, a team he's helping to keep on the straight and narrow in their fight against N.O.W.H.E.R.E., a story that will come to a head soon with a crossover event called "The Culling," which takes place across Teen Titans and other titles and ties into the May launch of The Ravagers. Two crossovers and a team to lead? That's a pretty busy kid.

Disney in Danger of Losing Exclusive Rights to Mickey Mouse

Nathan's Hot Dog Eating Contest: What Time It Starts and How to Watch Online